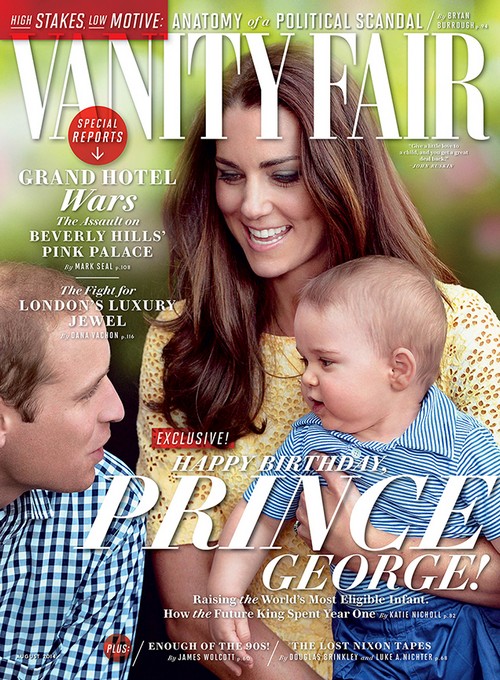 Prince William and Princess Kate Middleton welcomed their first son, Prince George, into the world nearly one year ago. In honor of the eleven month old heir’s upcoming birthday Vanity Fair featured him on their July 2014 cover. And, the Royal family received a whole spread in their honor, and an in-depth article about how their lives have changed since they welcomed Baby George in to the world last year.

We have been reporting for weeks now that William and Kate have been trying for a second baby by Christmas. And, according to Vanity Fair, the Royal couple is indeed trying for another baby and Prince George’s little brother or sister could be conceived very soon. Vanity Fair’s reporter spoke to a source close to the Prince and his wife and very soon. The July 2014 edition of Vanity Fair states, “As for speculation about when Prince George will have a sibling, [Katie] Nicholl reports that there are rumors among the couple’s friends that they plan to try this summer.”

Well, summer is already here, which means that Prince William and Kate have most likely already been trying to conceive. Rumors emerged over the weekend that Kate Middleton was in the early stages of her second pregnancy because her face appeared puffy when she appeared at the Tour de France starting line with Prince William and Prince Harry and gave the cyclists a royal send-off. Since Vanity Fair has confirmed that the Royal couple would be trying to get pregnant this summer, then there is a good chance that she is already pregnant, and the rumors weren’t that off base.

How excited are you about the story on the Royal Family in the latest edition of Vanity Fair? Do you think that Kate Middleton might already be pregnant? Let us know in the comments below!