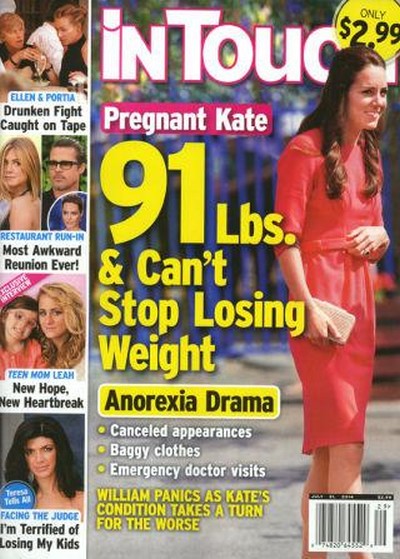 We recently received confirmation that Kate Middleton and Prince William were trying for their second child over the summer, and it definitely looks like they succeeded. Several reports have stated that Kate has recently become pregnant, and that’s one of the biggest reasons she’s avoiding the spotlight right now. Otherwise, you think the Queen would let her stay at home without making charity appearances every other day?

The latest cover story from In Touch Weekly also confirms Kate’s pregnancy, although they’re taking a much more dour view on the subject. According to the report, Kate’s dealing with anorexia and weight loss at the same time as the pregnancy, which is not only compromising her own health, but the health of the baby. Understandably, William is extremely worried about her deteriorating condition, and as Kate continues to lose more and more weight, he’s reportedly determined to get her in stable condition.

See, here we were, thinking that all of her cancelled appearances were because she didn’t want to show her baby bump to the whole world, not her half-starved appearance. Honestly, Kate made an appearance a few days ago, and she actually looked bloated – not skinnier than usual. It’s not like she has a ton of weight to lose, and if she were to drop pounds that drastically due to anorexia, it would be extremely apparent.

So while I buy that Kate is pregnant/getting pregnant, I’m not buying this anorexia story. She may have lost some weight due to running after Prince George all the time, but if she was dealing with anorexia, it would have been more obvious in her appearance.

In Touch also claims that they’ve got a drunken fight between Ellen DeGeneres and Portia De Rossi on tape. Breaking news: couples fight after they’ve had a few drinks. But then again, Portia did just go to rehab for rumored alcohol addiction, so maybe there’s something to this.

Finally, Brad Pitt, Angelina Jolie, and Jennifer Aniston reportedly had the world’s ‘most awkward reunion ever!’ According to In Touch, Jennifer ended up accidentally running into Angelina and Brad at a restaurant, and I’m sure what followed was extremely humiliating for everyone involved. Think about it – the guy who cheated on his wife, the wife who got cheated on, and the mistress. It’s been years since the Brangelina scandal, but I doubt that makes it any less painful for Jennifer Aniston.