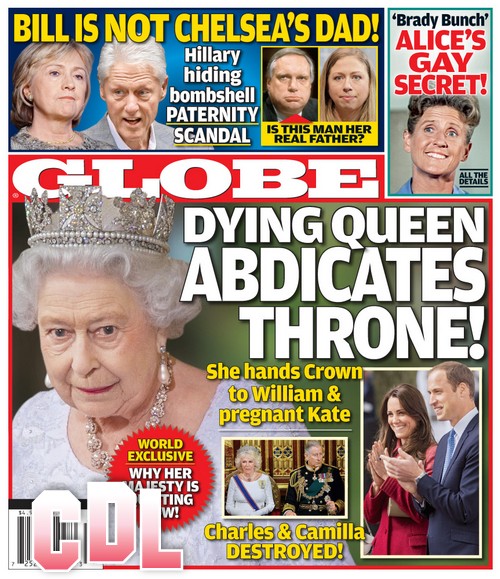 Queen Elizabeth has spent the last 18 months trying to make a good, sound decision on who is best suited to rule England once she steps aside. In Elizabeth’s perfect world she absolutely wants to decide to pass her power on to either Prince Charles or Prince William. Ruling England while on her death bed has never exactly been The Queen’s style plus she has a true, deep-rooted love for her country so before it gets that bad she wants to know that a solid leader is in place. The decision has been tough though. On the one side it is Charles’ birthright to be king but his track record is kind of a joke. He is known for long winded letters about nonsense and being a doormat for his hard drinking wife Camilla Parker Bowles more than anything else. Not to mention  his recent diplomatic blunder comparing Vladimir Putin to Adolf Hitler smack in the middle of the Ukraine crisis!

On the other side there is William who is far more respected by the British people. He has a young family and has proven that he means it when he says that he wants to live a fairly normal life. While William’s pregnant wife Kate Middleton seems to be a bit of an exhibitionist if that is the worst thing that can be said of her, well she’s light years better than Camilla. According to the June 23rd print edition of GLOBE Magazine Elizabeth has finally made a decision after months of watching both sides and she believes that William and Kate are still by far the best choice for the country, especially now that Kate is pregnant with William’s second child and another heir to the throne. She is now preparing to abdicate the throne and pass the royal crown onto Charles’ son.

Needless to say this isn’t sitting well with Charles or good old Cami. After tossing back several gin and tonics she resorted to her typical rant about destroying the royals and telling all of their secrets to the press. Camilla has been threatening these things for a better part of a year now, do you really think she’ll make good?

I think everyone was sad to learn of the tragic death of Ann B. Davis last week. So many generations were raised on The Brady Bunch and Alice was sure at the center of the show. According to GLOBE Magazine’s investigative team Ann took a gay secret to the grave with her and you can learn more about it in the latest issue.

Speaking of secrets, could Hillary Clinton be hiding a zinger about who her daughter Chelsea’s real biological dad might be? You’ll have to grab the latest copy of GLOBE to learn more. In the meantime, is William best for the throne? Tell us your thoughts in the comments below! This week GLOBE digs in and grabs the hottest stories for us to enjoy. Not only are the secrets of the biggest celebrities laid bare for us but we get to hear the truth about what is whispered inside the Palace walls. When I look for news and entertainment at its best I look for GLOBE!