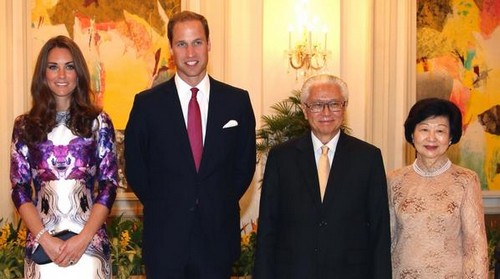 Kate Middleton is insulted as Queen Elizabeth refuses to invite the commoner Middleton family to the traditional Sandringham Christmas lunch or Boxing Day Hunt. Queen Elizabeth may have accepted the Middletons as part of the family after Kate Middleton got married to her grandson, Prince William, but she’s certainly not showing it. We know that the Queen gave Anmer Hall to Kate and Will, probably in an attempt to spend more time with her great-grandson, Prince George, as he grows up. Plus, it provides a great way for Will and Kate to spend the holidays at Sandringham, but also have their own privacy.

But – and this is a BIG but – Kate Middleton and Prince William usually spend the holidays with Kate’s parents, Carole Middleton and Michael Middleton, and sister, Pippa Middleton. Kate and Will have always been clear that they want a normal upbringing for George, and what’s more normal? Growing up in a normal family and having normal holidays with presents and food and cleanup? Or spending time at a palace, being waited on hand and food and unable to do anything you want to do out of respect for royal ‘decorum’? And George is so young that he may not realize the differences, but it’s only a matter of time before he does.

However, this year will supposedly be different. See, Kate Middleton, Prince William, and Prince George can invite Kate’s family to spend Christmas with them at Anmer Hall – since it’s theirs and all – but they will actually be having the Christmas lunch at Sandringham House, not Anmer Hall. In simpler terms, that means that Kate, Will, and George have been invited for the special royal lunch, but the commoners must stay at Anmer.

A royal source tells the Daily Mail, “It is highly unlikely that Kate’s family will be invited to the big Christmas lunch, or the famous Boxing Day shoot. he Queen is fond of Kate and doesn’t mean to exclude her family – indeed she has broken many of the old rules for them in the past. But if all of her children and grandchildren’s wives had their families to lunch, there wouldn’t be enough room, even at Sandringham House’s dining room.”

I love how this source points out that the Queen has broken several old rules for Kate in the past, especially since it’s true. However, Queen Elizabeth is a lady of tradition, even if tradition is dead and gone. She’s not going to get rid of all of her hard-earned rules, and that means no royal Christmas lunch for the Middletons.

Queen Elizabeth II and husband Prince Philip, Duke of Edinburgh, visit the Tower of London’s ‘Blood Swept Lands and Seas of Red’ poppy installation at the Tower of London, on October 16, 2014 in London, England. The art installation will eventually consist of over 800,000 ceramic poppies, and serves to symbolize British and Colonial military fatalities in WWI. FameFlynet

Check out the new pics of Kate Middleton and Prince William joining Queen Elizabeth and Prince Philip in welcoming the President of Singapore and his wife on October 21 – pregnant Kate’s first official public appearance since announcing her second pregnancy.

Prince William, Duke of Cambridge and Catherine Duchess of Cambridge attend a Ceremonial Welcome for the President of Singapore Tony Tan Keng Yam at Horse Guards Parade on October 21, 2014 in London, England. FameFlynet