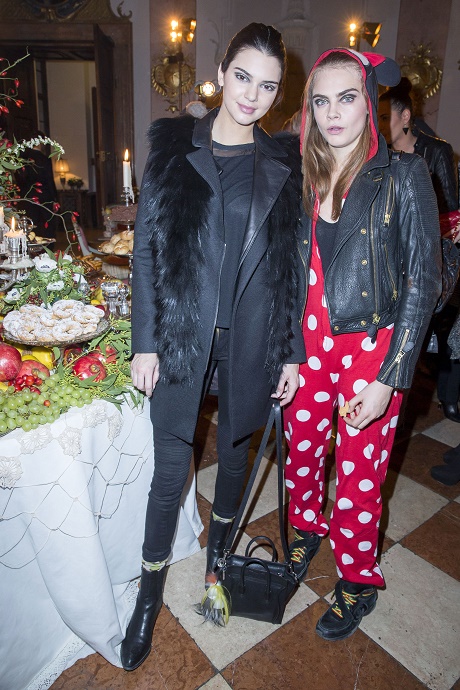 Kendall Jenner and Cara Delevingne are two peas in the same pod, although I would still consider Cara a more ‘legitimate’ celebrity than Kendall Jenner. No matter what the media keeps telling me, I can’t take them seriously when they keep trying to convince me that Kendall Jenner is famous because of her modeling abilities. What modeling abilities? She’s got a pretty face, is stick skinny [unlike the rest of her sisters], and she can wear clothes and walk down the runway. She doesn’t have a particularly editorial ‘look’, and she can attribute the majority of her success to the Kardashian brand, even if designers and industry experts are loathe to admit it.

Either way, Kendall Jenner and Cara Delevingne recently had a shoot together for Love Magazine, and the similarities between them are striking. However, there’s one thing that people haven’t commented on, and that’s whether Cara’s going to try and hit on Kendall Jenner. If we’re looking at this objectively, why wouldn’t she? As Celebitchy notes, Cara Delevingne was recently attached to Jack O’Connell [the star of Angelina Jolie’s Unbroken], but that’s clearly not a serious thing. Plus, dating Kendall Jenner would complete her trifecta – movie stars, singers, and now reality stars.

Besides, I could totally see Kendall Jenner agreeing to such a relationship because it would help boost her public profile and she could add bisexual to her resume. I know that sounds manipulative and exploitative, but the thing with Kendall Jenner – she’s a Kardashian. They don’t think like normal people do, but rather in terms of media exposure and publicity. Even if she’s not attracted to Cara per say, she could easily fake a lesbian romance to gain some media attention. You know, so long as she stops chasing after Harry Styles.