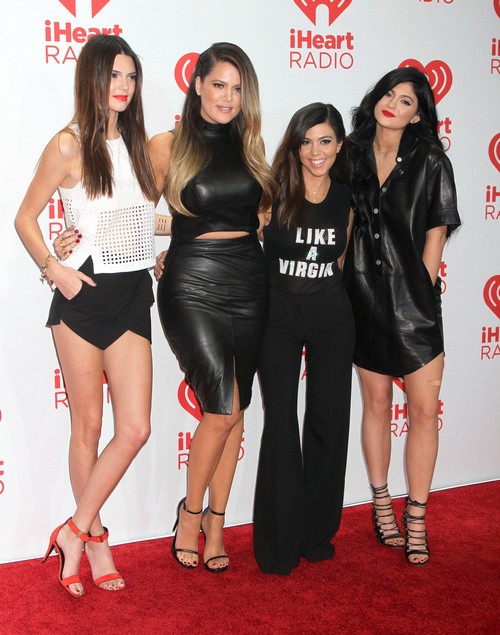 Khloe Kardashian’s biological father is rumored to be Alex Roldan, Kris Jenner’s former hairdresser. As Kendall Jenner matures, physically anyway, she is beginning to looks a lot like big sister Khloe Kardashian. That would strike many as odd given the half-sisters have different fathers, and neither look much like mom Kris Jenner. That alone may lead some to speculate about the paternity of the girls, especially given Kris’ self-admitted propensity for cheating, the woman told Jay Leno she was always a “slut.”

If pictures of Bruce Jenner were laid next to Kendall, it would almost certainly call for a question of paternity given the two look nothing alike, even before Bruce’s complete plastic surgery transformation. In looking at old pictures of Bruce when he was much younger, it is easy to see his pre-plastic features…none of which seem to match with Kendall’s. As Kendall doesn’t really bare any resemblance to her mother or alleged father, but looks an awful lot like big sister Khloe, it begs the question, “Could Khloe and Kendall have the same father?”

Khloe Kardashian has continually been in the news over speculation that her father was not Robert Kardashian as she was told, but very close friend of mom Kris‘, Alex Roldan. Alex is very much Kris’ type and two were said to have a years-long affair in sort of a ‘friends-with-benefits’ type of situation. Now, as Kendall is transforming into a woman, she is starting to closely resemble Khloe. If Alex fathered Khloe, then why would he be overlooked as a possible father to Kendall as well. Not many would put it past Kris to have continued carrying on with Alex while she was with Bruce. She was attracted to Bruce for his fame and money, while Alex is her true type—making for a lot of chemistry going on between them. Kris also thrives on excitement and has cheated on all them men in her past, so it certainly is not far fetched to believe Roldan fathered Kendall, just as he did Khloe. Kris and Bruce’s youngest daughter, Kylie, has (well, had) smaller lips like Bruce, but she does have a wider nose as well so there is the possibility Bruce didn’t father either of the girls.

While Bruce stands at 6’2″, Roldan is about six feet tall. Both Kendall and Khloe stand at 5’10, while Kris is only 5’6. Even before Bruce’s multiple surgeries, his nose is much thinner than Kendall’s wide nose, which closely resembles her sister Khloe’s nose. Khloe, born in 1984, is 11 years older than younger sister Kendall, but Roldan has been in Kris life for more than 30 years, and it doesn’t seem he has any intention of leaving any time soon.  Kris has never worried about Bruce or Alex spilling the beans because all three of the parties involved in this triangle had always been quite happy with the arrangement. Alex was able to have sex with Kris, Bruce had Kris as his beard, and Kris was happy to be able to be with Alex, avoiding any intimate contact with Bruce but still enjoying his bank account.

Now that Bruce doesn’t need to keep the arrangement going, he’ll likely still stay quiet as he’d never want to hurt his daughters. Kris better play her cards right, however, as Bruce likely has an unimaginable amount of dirt on her that would destroy her empire if he were to go public.

Okay, CDLers…tell us what you think. Has Kris been cheating on Bruce all along? Could Alex have fathered Kendall and Kylie Jenner? Share your take on this below.