Kim Kardashian Marriage Fight With Kanye West: Kim Wants To Be a “Kardashian-West” 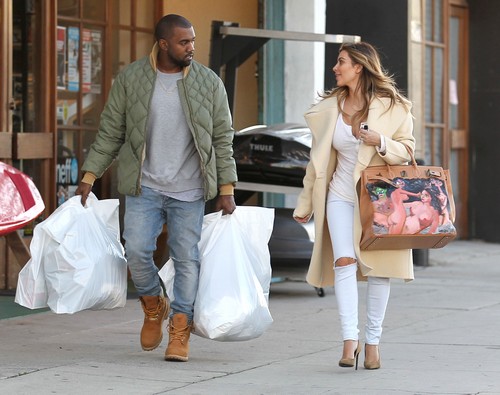 Another week, another reason for Kanye West to completely lose his cool on the Kardashian Klan. Apparently Kim Kardashian really thinks that her wedding to Kanye is going to happen and so she has been working out all of those married details in her head. While sitting down to dinner with her family Kim told everyone that after they swap vows she has decided to be known as Kim Kardashian-West. Of course Kris Jenner loved this idea and thinks that tacking West onto the end of it will add more, er, star power.

According to the Jan. 20th print edition of National Enquirer Kanye was instantly furious and screamed that his wife will only have his last name. He wants Kim to separate herself from the family business as much as possible and seems to believe that the name West will be her ticket to respect and class. I guess that’s because Kanye is God, right? Anyway, Kim was in for a treat after they left her mother’s house because Kanye was livid and ripped into her all the way home.

I wonder what happens when Kim defies Kanye or stands up to him. I mean, do you think that she ever does? Or is she just his muse on a good day and a puppet on all the bad ones? I don’t know if I can envision her having any opinions that she thinks are worth fighting him on. Will these two ever make it down the aisle? If so will Kim drop the Kardashian name? Better yet, do we care any more? Tell us your thoughts in the comments below!