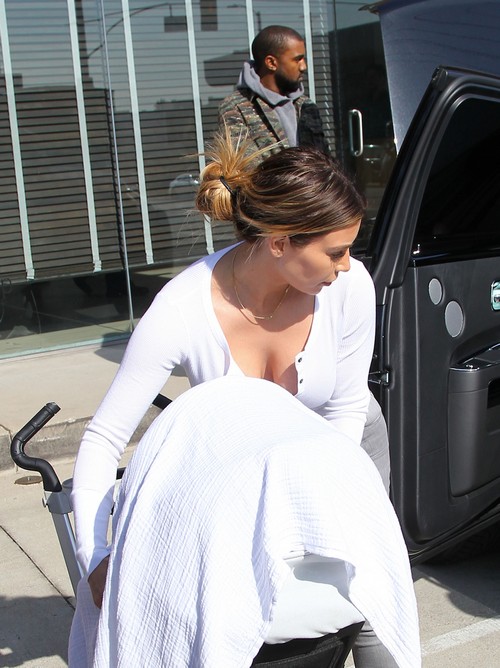 According to initial reports, Kim Kardashian and Kanye West were planning on having a summer wedding, but that might all change now. Why will it change, you ask? According to a report from US Weekly, it’s because Kim and Kanye want to have another kid, but Kim doesn’t want to walk the aisle as a pregnant bride.

Well, duh. I doubt she’ll ever want to go through the humiliation that she faced while pregnant the first time, and having her wedding while sporting a baby bump no doubt doesn’t appeal to her.

Anyway, Kim and Kanye were planning on trying for another baby after their summer wedding, but it looks like neither of them can wait. Thus, they’ll be having their wedding in May instead, which means we’ll be subjected to non-stop coverage of that atrocity for only the next three months as opposed to the next six months. Yay, us!

A source tells US Weekly, “Their goal now is to start trying after they get married.” Who wants to a bet that most of this is Kanye’s influence? I have a feeling that Kim doesn’t even want to get pregnant again, especially after working so hard to lose that initial round of leftover pregnancy weight. If she gets pregnant, she’ll have to face the public humiliation and strict weight loss regime all over again. Is pleasing Kanye worth it? Well, probably. Without Kanye, she wouldn’t even be as relevant as she is now. She’ll put up with getting pregnant again, but at least she’ll have her ideal wedding this way.