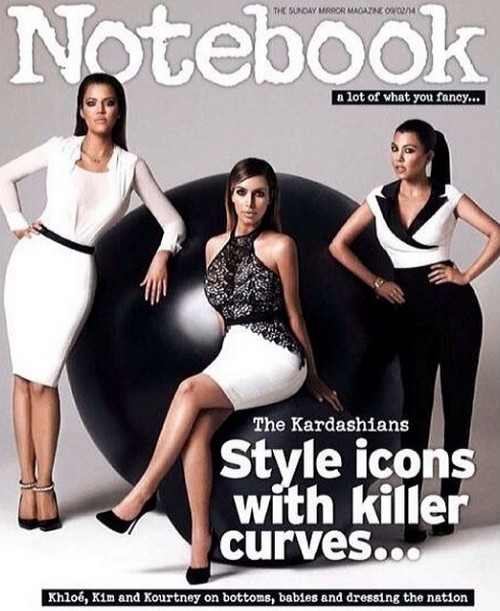 Khloe Kardashian, Kim Kardashian, and Kourtney Kardashian are all gracing the latest cover issue of Notebook Magazine, looking significantly thinner and not-at-all like their normal selves. Their bodies and their faces are photoshopped into oblivion, and if we didn’t know it was the Kardashian, there’s no way we’d be able to discern these three people from any other nameless and pointless reality stars.

Obviously, people aren’t completely blind and have already noticed the rampant photoshop on Notebook’s cover. The Fashion Gist tweeted, “The Kardashians on the cover of Notebook UK – I see over photoshop. Do You ???”

A fan also tweeted, “Really really bad photoshop.. We all know khloe is NOT that skinny lol. Can clearly tell this has been photo shopped.” And when random fans on Twitter call the photoshop obvious, you KNOW it’s obvious. Our world has started becoming more and more desensitized to photoshop, especially with how often it’s used in the entertainment industry, but this cover was just so bad that it couldn’t even pass the most oblivious fans.

Granted, Khloe, Kim, and Kourtney have all lost weight recently – but for a group of sisters that reportedly pride themselves on their curves, it’s kind of ironic that they’d want themselves so drastically altered for this cover, no?