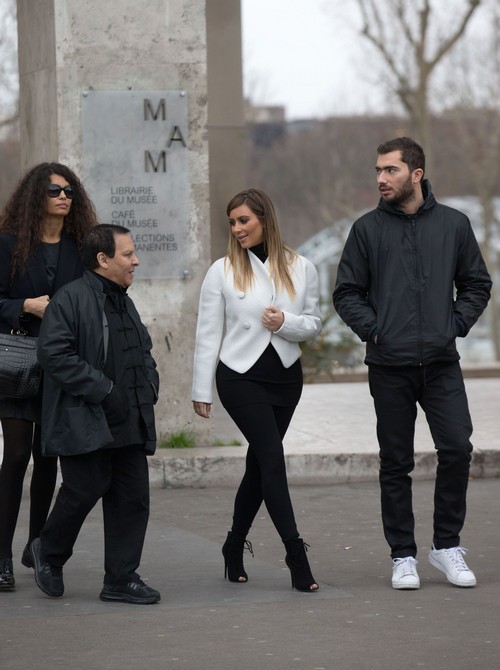 Kim Kardashian already has an incredibly high opinion of herself, something which has just increased in the wake of her engagement to Kanye West. And obviously, being engaged to Kanye West will only serve to increase one’s ego, which has resulted in Kimye’s delusions of grandeur. Both Kim and Kanye seem to think that they’re fit to get married in the Palace of Versailles, since they were spotted scouting the location as a potential wedding location while they were in France last weekend.

The rumor that they were interested in Versailles was circulating beforehand, so it seems pretty obvious that Kim and Kanye really, really want to get married there. Unfortunately, if they want to get married there, it looks like they will get married there. It’s not like they don’t have the money or resources, as much as I hate to admit it. We’ll just have to live with the fact that Kim and Kanye will end up getting married in the same palace that countless members of the royal family got married. This is what our world has devolved to: reality stars = royalty.

Of course, the Palace of Versailles might not be too keen on Kim and Kanye getting married there either, if their latest tweet is anything to by. The reps for the palace tweeted, “On 19th January @KimKardashian and@kanyewest visited the Palace of Versailles but they are not planning their wedding at the Palace.” Basically, they’re saying that they didn’t really have a choice and had to let them visit, but they’d rather eat cow dung than let Kim and Kanye get married there. Well, that’s not what they said, but it’s in the subtext, I swear.

Anyway, Kim already uploaded a keek video of herself in the famed Hall of Mirrors after closing time, basically rubbing the fact that she has private access in everybody’s faces. If she’s this insufferable now, can you imagine what will happen if they actually get permission to have their wedding there?