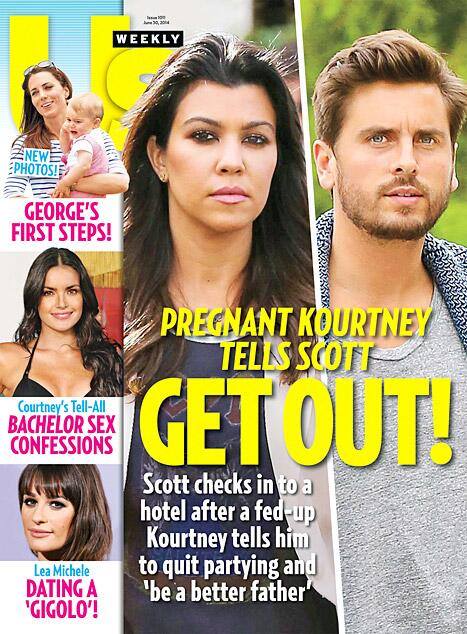 I think that Kourtney Kardashian‘s happy pregnancy news was replaced by typical Scott Disick drama even faster than usual! When it first broke that she was expecting baby number three, I have to admit that I was hoping that it could be a sign that Scott has been keeping himself together. We know that he can pull himself together — but maintaining stability, well, that seems to be a real problem.

Instead of joining her in her excitement, Scott has quite clearly been in meltdown mode. It’s pretty obvious that expecting another child has pushed Scott off the deep end and Kourtney is left scrambling to stabilize her family.

According to the June 30th print edition of US Weekly, Kourtney kicked Scott to the curb and insists that he will stay there until he gets himself together. Scott is reportedly holed up in a Hampton’s hotel and still partying while Kourt juggles their kids alone. Sources say that she is strongly suggesting that Scott consider rehab but, at least for now, his response to that suggestion has been to pour another drink.

Remember Courtney Robertson from The Bachelor a few seasons back? She temporarily won Ben Flajnik’s heart after pissing off all of the other girls that were handpicked by ABC. Courtney has decided to extend her 15 minutes of fame by writing a book about her experiences on the show and she’s dishing the dirt on her sex life with Ben, of course. US Weekly has a sneak peek at her new book, do you guys think that it’ll actually sell more than a few copies?

Lea Michele has finally started dating again after dealing with the death of Cory Monteith and she picked an interesting guy to attach herself to. Matthew Paetz has been accused of being a gigolo and accepting money as a paid date in the past. Lea simply describes Paetz as an aspiring actor with a huge heart and US Weekly has more details on their blooming romance.