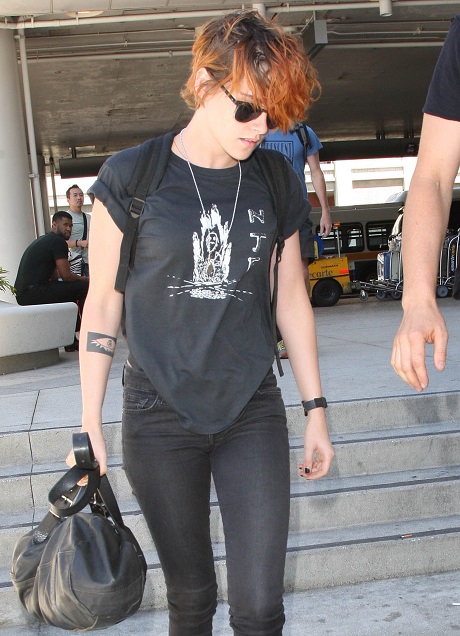 Whether or not Kristen Stewart and Nicholas Hoult are actually dating doesn’t matter to Robert Pattinson. What matters is that Kristen finally has a new boyfriend, or is at least busy trying to get a new boyfriend. For all these months, he’s reportedly been the target of Kristen’s affections, even though he’s tried his best to move on and show that he’s over her. In fact, by Rob’s own admission, they’re still friends and keep in touch, which probably made the whole situation more difficult for Kristen.

But what is a guy to do? He’s not going to sit there like a monk waiting for Kristen to find a new boyfriend. Yes, she cheated on him. Yes, he went back to her. He realized his mistake fairly quickly and then dumped her for good, and like a gentleman, he’s actually refrained from publicly announcing a girlfriend since then. Of course, various tabloids and magazines have already done that job for him, but he’s actually worked hard to keep his flings and relationships out of the spotlight – probably for his sake just as much as Kristen’s sake.

Anyway, that’s all led to never-ending rumors of a Robsten reunion, even though that’s the last thing in the world that Rob wants. Granted, he can’t exactly say that in public, but I have no doubt he’s said something along those lines to Kristen. If that’s the case, then she’s either taken a sabbatical from dating or she really was trying to get him back all these months. Did it work? Not. At. All.

If anything, she seemed to drive him farther and farther away, towards all the other models and actresses in Hollywood. But finally [FINALLY], it looks like she’s moved on. Rumors of Kristen dating her Equals co-star, Nicholas Hoult, have been circulating for the past few weeks. And to Rob, it’s probably music to his ears.

With Kristen occupied in trying to seduce Nick and/or build chemistry with him, there’s not as much time for her to try to win him back. Plus, the media’s finally stopped writing about them getting back together, so it’s a win-win situation for him.