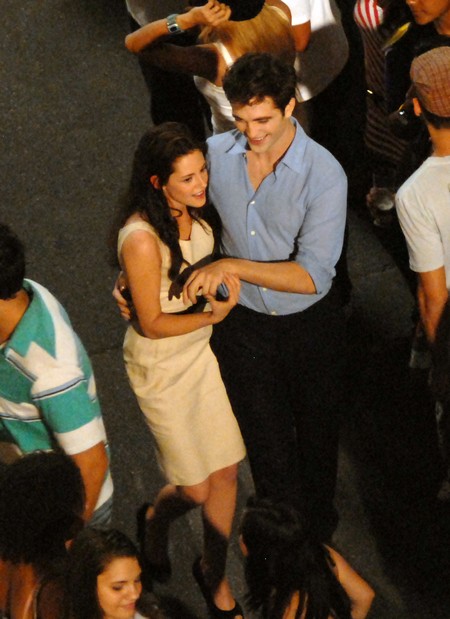 The Ice Bucket Challenge to support ALS awareness has been all the rage for the last several weeks and just when you think that everyone has done it, a new celeb or two pops up. Former Twilight stars Robert Pattinson and Kristen Stewart both took part in their own unique ways over the last few days. Rob was challenged by his good friend Zac Effron and the video was quickly posted to his social media sites. Since Rob was on location and couldn’t exactly get his hands on a nice big bucket, he managed to improvise.

The actor dumped a pot of ice cubes over his head while someone sprayed him with the hose, on and off repeatedly. Someone else was standing nearby throwing ice cubes and red solo cups at Rob. The video is actually pretty funny and in the end he nominates Marilyn Manson,Guy Ritchie and Mia Wasikowska to take the ALS Ice Bucket challenge next.

Kristen Stewart truly looked like one of the boys when she took the challenge alongside Nicholas Hoult and Scott Fahrendorf. First they bent over and stuck their heads into buckets for as long as they could hold it and then they dumped them over their heads. As Kristen was freaking out the guys doused her with a huge bucket of water as well. After the fact Kristen nominated Joe Dempsie, Colin Firth and Craig Roberts. Is it just me or is Kristen starting to look like a total dude- like Rosie O’Donnell-style? Which ice Bucket Challenge did you guys prefer- Robert Pattinson’s or Kristen Stewart’s? Tell us in the comments below!