Both Kristen Stewart and Dylan Penn Attending Coachella 2014 – Which One Will Robert Pattinson Choose? 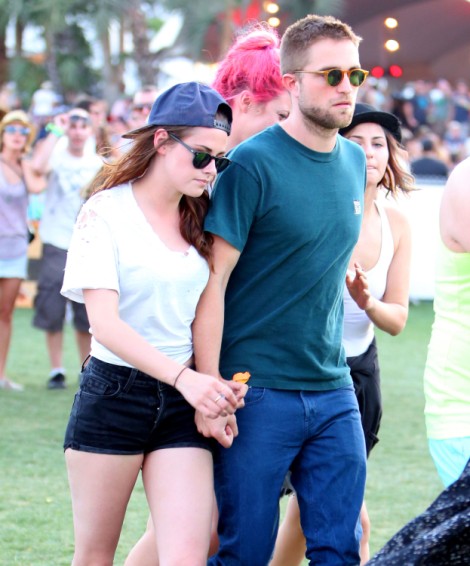 This weekend the annual Coachella music festival kicks off in California. Celebrities arrive in droves from all over the country to attend the highly-anticipated music festival. Twilight’s popular on-again off-again couple Robert Pattinson and Kristen Stewart have attended Coachella together, hand in hand, for the last two years in a row. Robsten fans are waiting with bated breath to see who Rob will attend the festival with.

Twihards have been hoping for a Rob and Kristen reconciliation for months now. Last week media went into a frenzy when Rob Pattinson arrived in Los Angeles just days before Kristen Stewart’s birthday. Rumor had it Rob was planning to make a grand epic gesture and take Kristen out to dinner for her birthday and to formal announce they were a couple again. Rob and Kristen never went out on her birthday though, or any day since he arrived in Los Angeles for that matter. Now several sites are reporting that Rob and Kristen are postponing her birthday, and celebrating it this weekend when they hit up Coachella together. Despite their drama and whatever was or wasn’t going on between them, Kristen and Rob have set it all aside for the last two years and canoodled together at Coachella. If they are not seen at Coachella this year then it will be the final nail in the Robsten coffin.

Rumor has it Rob Pattinson’s other alleged girlfriend Dylan Penn has already planned a weekend of fun with her friends at Coachella to celebrate the launch of her NSFW magazine spread in Treats! Magazine. Rob and Dylan have been allegedly dating for six months now after they were spotted on PDA-filled date in Los Angeles last Fall.