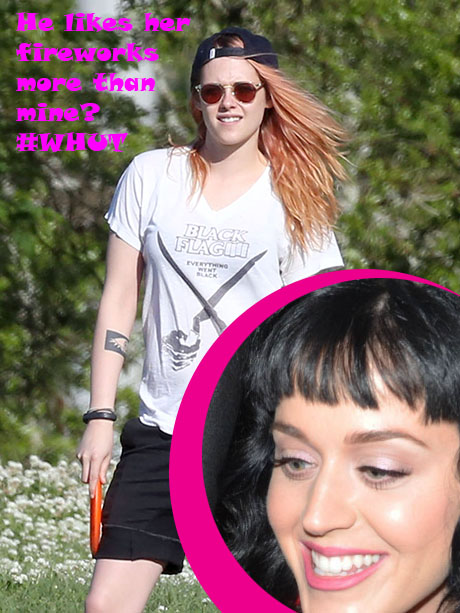 If you haven’t had enough of all the Coachella 2014 news, especially regarding the hordes of celebrities that descended upon the iconic music festival, then you’re totally in luck. Because we have more for you. Kristen Stewart chose not to attend Coachella, as her work took top priority, but that didn’t stop her ex lover (or hookup buddy) Robert Pattinson from checking out the festivities . . . and he didn’t go at it alone. He tagged alongside his friend Katy Perry, who was of course in attendance. [Note: One source claimed Kristen did attend, but we’re not sure if we fully believe the source].

Kristen was reportedly super bummed about missing the festival, which was definitely the place to be if you’re any young celebrity important in the biz. An insider for Hollywood Life says, “Kristen is super bummed that she missed Coachella. She planned on going but decided to stay in New Orleans since shooting starts tomorrow [Tuesday, April 15]. She wanted to be fresh and rested.”

We certainly applaud Kristen for being so dedicated to her career — but don’t you think she’s a little pissed off that R-Patz, her destined lover, was seen shuffling around with The Perry?

“Of course she’s disappointed that she didn’t get to hang out with Rob — that was really the main reason she wanted to go in the first place. But we sent her funny pics and texts and so did Rob. Kristen doesn’t care if Rob and Katy spend time together. She knows they are just friends. She just wishes she could have been there, but her work comes first.”

Yeah, sure. Whether Kristen and Rob had an open relationship during their time together or not is beside the point. Seeing R-Patz with Katy has got to get on Kristen’s nerves, especially when she’s stuck working and not able to let loose. Could Robert’s latest hook-up with Katy bother Kristen enough to make her end things between them permanently? Probably not – since Robert always has the Rupert Sanders cheating card to play. Damn, that really does hinder Kristen’s ability to demand that Robert be exclusive, doesn’t it. How much longer before these two get back together? Leave your thoughts in the comments section below and be sure to check out some pics from our Coachella gallery below!