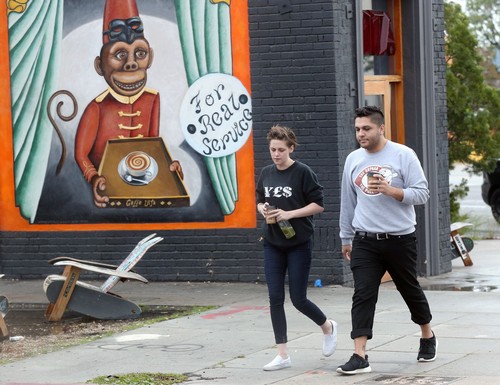 If you survey most guys about breaking up with girls, they’ll tell you that they would rather walk on hot coals than admit that they’re not into someone anymore. Robert Pattinson, even though he’s a sparkly vampire/movie star, probably falls into the same category. Even though Robert Pattinson and FKA Twigs have been dating for a few months now, sources tell us that their relationship is all heat and no substance. In other words, the sex is great and the physical connection is great, but everybody close to the couple sees a breakup in their future. Of course Kristen is not close to the couple at all but she is in touch with pals who are mutual friends with Rob.

Obviously, Kristen Stewart could predict this coming collapse from the way FKA Twigs shamelessly uses her relationship with Robert Pattinson to land professional gigs. She’s landed interviews with prestige magazines Rolling Stones, and she’s even landed a feature in Vogue Magazine. In other words, FKA Twigs is milking her relationship with Rob for all its worth, including any future they could have had together.

Now, we obviously can’t predict the timeline of this relationship, but how long do you think it’ll take a guy like Rob – a very private person, from all accounts – to tire of the endless PDA and media exposure, especially since his last relationship with Kristen Stewart was largely kept away from the paparazzi.

Plus, sources are telling us that Rob’s physical connection and chemistry with FKA is very strong, but eventually, he’ll come to his senses and return his focus to his career. And by that point, FKA Twigs will have gotten everything she wants out of that relationship, and she’ll dump his ass. Or something will lead to their inevitable breakup, one way or another.

Don’t you guys agree? Do you really think that Rob would stay with someone who is so blatantly using him for his career, or do you think he’s just stopped caring? Perhaps the excessive Hollywood partying’s gone to his head, which wouldn’t surprise me.