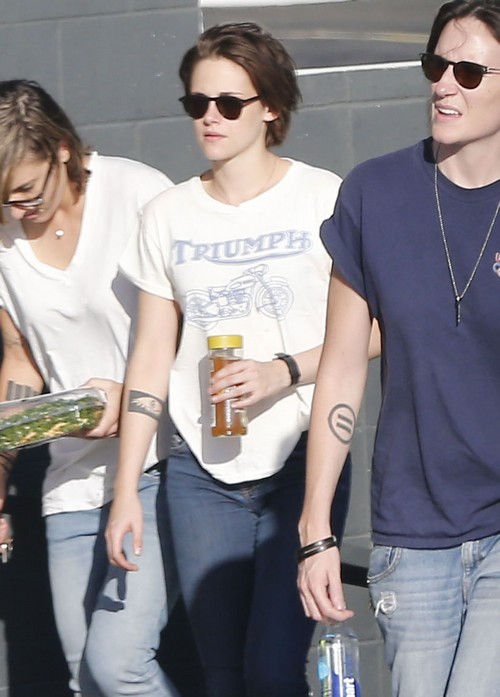 Robert Pattinson is dating Tahliah Burnett aka FKA Twigs! On the heels of interview with Esquire UK, where Robert Pattinson finally broke his silence about the affair then-girlfriend Kristen Stewart had with her married Snow White and the Huntsman director, he has officially moved on with a new girlfriend, singer and dancer FKA Twigs.

After Stewart’s affair, which led to the eventual demise of her relationship with Pattinson, she tried to patch things up with her love of four years to no avail. They briefly reconnected, but couldn’t rekindle what they had before the scandal. Neither publically moved on with someone else… until now.  Stewart was once again providing fodder for the tabloids recently when she was pictured enjoying some off-screen time with her co-star Nicholas Hoult, who happened to be Jennifer Lawrence’s boyfriend at the time they began filming “Equals.” Rumors swirled that the two were getting close, and not long after, Hoult and Lawrence broke up. Kristen was accused of ruining yet another relationship.

While Kristen was giddily having fun with her co-star, which is now becoming a trademark of hers, it was reported that former love Pattinson had moved on as well and is now exclusive with girlfriend Tahliah Barnett, aka FKA Twigs. Right around the time the news broke about Pattinson’s romance, Stewart’s fun came to a loud, screeching halt. Though Kristen felt like she was in a good place and was having fun with Hoult, she always believed that Pattinson was still hung up on her and that they had a chance. Once she heard that he had moved on, especially with a cool singer like AKA Twigs, it crushed her. To Kristen, this finally meant “the end” of their love story. Kristen took the fact that Robert hadn’t dated anyone publicly since their split to mean that he was not completely over her, and that there was still a chance for a reunion. She also believed that they were friends on a special level, so when she found out  from sources other than Robert about his romance, she was really upset.

Kristen thought of Robert as her security blanket, and enjoyed having him around, or at least knowing if she needed him, he’d be there for her. Now she knows his new relationship status and reality is setting in. Kristen knows this truly means the end to their tortured romance. Shortly after their breakup, Kristen tried feverishly to win a heartbroken Robert back. While Robert was able to resist Kristen, with the exception of a brief reunion, she always felt that deep down, he still loved her like no other and that she could have him back if she truly wanted him. His new romance, however, changes all of that. Knowing she can’t call him at any time just to talk or share her problems is upsetting her. Even more upsetting is that the man she loved and lost has now moved on. Seeing him so happy with someone else, and thinking about the two of them getting close is eating away at her. Don’t be surprised if Kristen tries to throw a wrench in Pattinson’s plans for happiness with his new love.  She was fine without him, but knowing he is happy with someone else, not pining away waiting for her is making her green with envy and she isn’t afraid to play dirty.

I want to hear from my CDLers. Do you think Kristen is selfish? Does she have a right to be upset about Robert’s new romance? Weigh in below.