Kylie Jenner Being Scammed by Blac Chyna and Tyga: Playing Kylie and Using Her for Money and Kardashian Connections? 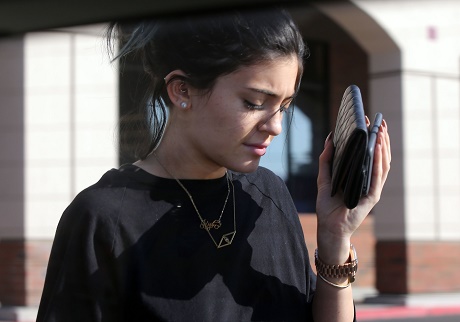 Is Kylie Jenner being scammed by her new boyfriend, Tyga, and Blac Chyna–the woman she supposedly wronged? Maybe! But let’s back up for a second. Kylie Jenner’s whirlwind romance with rapper Tyga has everyone’s tongues wagging, and for good reason. The Keeping Up With The Kardashian’s star is only 17! And she allegedly “stole” Tyga from his longtime girlfriend and baby-mama, Blac Chyna, who is Kim Kardashian’s BFF! All parties involved refuse to confirm or deny that Kylie and Tyga are dating, but as we speak they are on a romantic getaway in Paris, France. You do the math.

According to recent reports, Blac Chyna is furious with the Kardashian sisters, and disgusted that Tyga would throw away their family for the 17-year-old reality TV starlet. But is she really furious? Or is Chyna just laughing all the way to the bank? Rumor has it Chyna and Tyga are far from over, and Kylie Jenner is getting scammed!

Red flags went up on Instagram this weekend when Tyga and Kylie were on their romantic Parisian vacation. Tyga may have been in Europe with Kylie, but his heart was definitely still at home with Chyna. The rapper took to Instagram and began liking Chyna’s photos, and Chyna in turn posted a photo of herself and Tyga cuddling in bed (which she quickly deleted afterwards).

After Tyga and Chyna’s Instagram love fest, we decided it was time to investigate Kylie’s new boyfriend a little further. We spoke to a pal of Chyna’s that has known the model for years, and what they revealed was astonishing.

According to our source, “Tyga will always love Chyna, they will be back together in no time. Chyna knows that he doesn’t care about Kylie, it’s all a publicity stunt to make money. Tyga and Chyna do okay, but their bank accounts look nothing like the Kardashian’s. Kylie is showering Tyga with gifts and money, he even sent some of the money he got from her home to Chyna to buy stuff for King. Who do you think paid for this trip to Paris? Kylie!”

Wow, so basically Tyga and Chyna are totally scamming Kylie. Once her bank account is empty, Tyga will be right back by Chyna’s side. Kris Jenner better step in before her love-sick teen daughter gives away half the family fortune. So, do you think Tyga and Kylie are really in love? Or do you believe he is just playing her and draining the clueless teen’s bank account? Let us know what you think in the comments below!