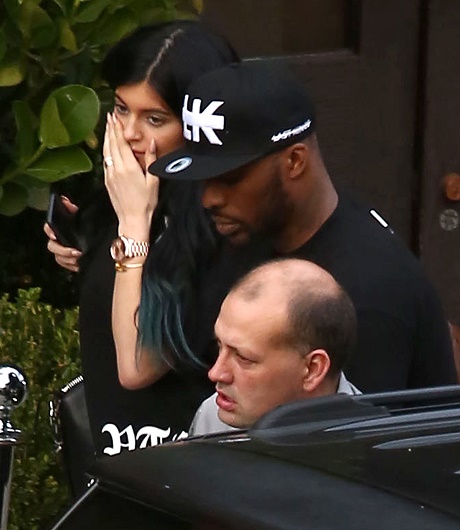 The Kylie Jenner & Tyga dating situation has everyone raising their shoulders in confusion–but it all seems pretty straightforward to us, as they were recently spotted in Paris together sharing a super romantic getaway! Keeping Up With The Kardashians star 17-year-old Kylie Jenner has everyone buzzing about her whirlwind relationship with rapper Tyga, whom she allegedly stole out from underneath her sister Kim’s BFF Blac Chyna. Although no one from the Kardashian family will actually confirm underage Kylie’s relationship with Tyga, despite the fact that they are currently on a romantic getaway in Paris, the teen’s loose-lipped friends are singing like canaries.

According to the October 27th edition of Star Magazine, Kylie Jenner may not even legally be considered an adult yet, but she is taking her romance with Tyga very seriously. Star’s inside source reveals, “Tyga has known the Kardashians for quite some time. Kylie always had a crush on him, and after she grew up so much over the past year, she wanted to take their platonic friendship to the next level. She’s so crazy about Tyga, she’s already telling friends she wants to marry him!”

Wait, it gets better, not only is Kylie so infatuated with Tyga that she is already planning their wedding, she is also excited to play step-mom to his two year old son King Cairo. Star’s source goes on to say, “Kylie would gladly take on the role of being stepmom to King Cairo, she doesn’t care that she’s just 17. She’s lived in the shadows of her sisters, and Tyga is the first guy to come along and shower her with attention. So I think her emotions are overpowering her common sense.”

Let’s be real, the odds of Chyna allowing a 17 year old who stole her baby-daddy anywhere near her toddler son are slim to none. If Kylie is anything like her old sisters, then this relationship will most likely crash and burn before they even make it back to the United States. How crazy do you think it is that Kylie is actually talking about marrying Tyga? Do you see wedding bells in their future? Let us know what you think in the comment section below!