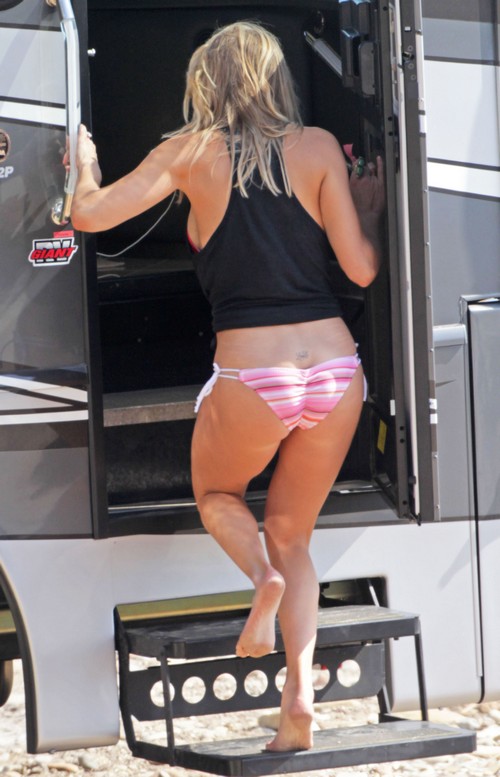 Either Leann Rimes spend literally every waking moment of her life on the beach, or the rumors are true and the jaded star calls paparazzi and gives them a heads up before she heads to the beach to ensure she is photographed and makes headlines. It looks like the country star is up to her old tricks and determined to appear like a better mother than Brandi Glanville (Leann may be crazy, but Brandi is a drunk mess-so in my opinion it is a toss up.)

Yesterday, April 19th, Leann and her hubby Eddie Cibrian headed to the beach in Ventura California with Mason and Jake (Eddie’s children with RHOBH star Brandi Glanville). Leann, Eddie, and the boys ate a picnic lunch together and then played volleyball. The photographs the paparazzi took yesterday are picture perfect and look like they have fallen out of an issue of Good Housekeeping – which leads us to believe they were 100% staged.

Leann has been under fire dozens of times for dressing inappropriately around Eddie’s young boys Mason and Jake, and wearing clothing that is way too revealing for a step-mother. Leann, completely aware that there would be paparazzi on site (since she called them), gave up an opportunity to show off he bikini bod and wore a cover up the majority of the time. In a few photos she was wearing bikini bottoms, but never took off her tank top. This leads us to believe either Leann’s bikini body isn’t up to par this Spring, or she has been reading all of the tabloids about herself and didn’t want to frolic on the beach half nude with her step-sons and give the magazines any more ammunition than they already have.

Do you think this photo-op was completely staged? Or, do you think that Eddie and Leann really have cliché family days like the one they had yesterday at the beach in Ventura, California? Was this just another “I’m A Better Mom That Brandi Glanville Campaign?” Let us know what you think in the comment section below.