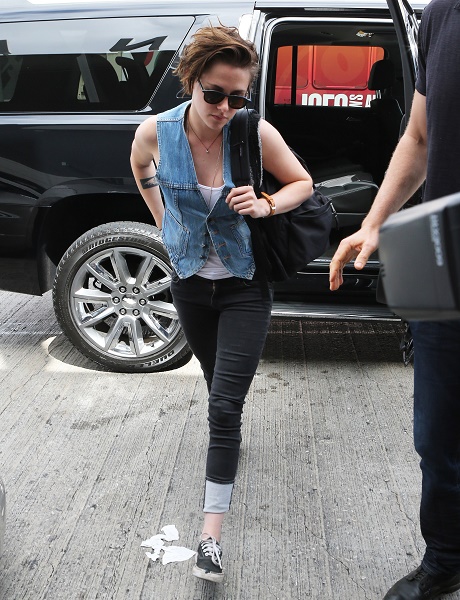 Liberty Ross recently finalized her divorce from Rupert Sanders, more than two years after he was first caught cheating with Kristen Stewart. A lot has happened since then, but Liberty doesn’t seem to be holding any grudges against either her ex-husband or the starlet who homewrecked her marriage. At least Liberty Ross is acting like she doesn’t hate Kristen Stewart for cheating with her husband. Of course, being with billionaire music mogul Jimmy Iovine just might make Liberty a little quicker to forgive.

However, Liberty does reveal that she’s learned a lot since the affair, explaining that she’s starting trusting her judgment a lot more than she used to. Hmmm… is she saying that she had an inkling that her husband was having an affair, even when it was happening?

We’ll let you be the judge. Liberty told Grazia Magazine, “Trusting your gut is always the best thing, no matter what people around you insist you should be doing or saying or thinking. Only you know and once you live the truth your heart is completely free.”

Of course, how could Liberty have known that she would become embroiled in the biggest Hollywood cheating scandal since Brangelina happened? The difference is that Rupert and Liberty had a happy marriage with children, and Kristen had a supposedly happy relationship with Robert Pattinson – and then Rupert and Kristen decided to throw it all to hell by hooking up with each other.

I still can’t explain what must have possessed them to start their affair, but we know that neither Rob nor Liberty holds grudges against these two for messing up their relationships. Heck, Rob even seems relieved that he’s shaken off the shackle of the Robsten moniker, and Liberty seems happy that she can go back to living in London and doing her own thing, without having to blindly support Rupert’s directing career. Good for her!