Lindsay Lohan Relapses As Expected – Falls Off The Wagon – Was She Ever Clean and Sober? 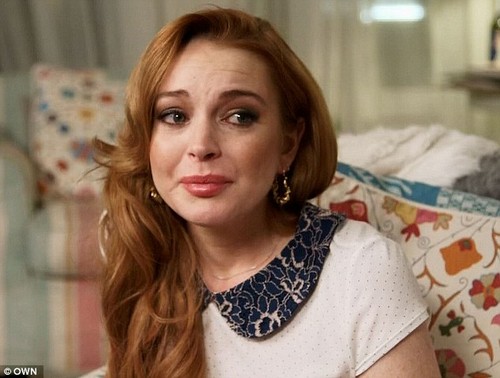 Lindsay Lohan finally admitted what we already suspected last night on her reality show. Just two months out of rehab, she revealed that she relapsed and drank alcohol. Lindsay’s home life is so chaotic and unstable even her life coach, AJ Johnson, quit because Lindsay was not ready to make a positive change.

Fresh out of rehab for one month, Lindsay admitted she fell off the wagon when she began dating someone. “Yeah, f*ck it, I screwed up. The person I was seeing does drink and I had a glass of wine. And that was it but I just had so much guilt and it’s okay to admit it. Now what do I do that it doesn’t happen again,” she said.

She also addressed the reports that she was partying and drinking when she visited LA in October 2013. A grainy photo surfaced showing her reaching for what looked like a wine bottle. Lindsay explained that she was in a hurry to get to the airport and was actually reaching for her purse, which happened to be near the bottle of wine. This is the same excuse we heard in October. However, are we really suppose to believe that a recovering alcoholic released from her sixth rehab stint can resist the temptation so early in her recovery?

AJ Johnson also confronted Lindsay about her sobriety. The life coach has been helping Lindsay find peace within herself, personal life, and career. Dina Lohan told AJ Lindsay had been drinking and AJ simply wanted to know if it was true.

“When we were at dinner the other night, your mom told me that you had been drinking,” she said.

“When we were at dinner with my mom when SHE was having drinks,” Lindsay replied.

AJ laughed at the statement but continued to press the issue. “It kind of hit me when she told me that. I came in the next morning and found wine in [your apartment].”

Lindsay then became increasingly defensive. “If I were drinking, it would be something I’d talk to Michael (Lindsay’s sober coach) about, and I would have gone to a meeting and I was NOT drinking. And this is something I don’t feel comfortable discussing on camera and I thought you of all people, as my friend, would have told me that in private.”

She also continued trying to blame Dina for the situation. “That was someone who was living in the guilt of their own actions, projecting it on me and that was really uncomfortable. It was a really nice dinner and then turned a corner for no reason.”

Lindsay was very evasive while filming her reality show. There were things she didn’t want to talk about on camera and would often ask the production crew to leave because she didn’t fell like filming on a scheduled filming day. One day after their confrontation, AJ tried to talk to Lindsay again. Lindsay refused let AJ or the production crew in her apartment.

“I can’t help someone when they’re not open to receiving. Sometimes it’s better to leave before it gets ugly so if there’s a chance later to do the work and come together, then you can. But for me at this point, it’s time for me to go,” AJ said before getting into a NYC taxi.

In a post confessional interview, Lindsay explained why she didn’t talk to AJ. “I felt like maybe she disrespected me by asking me certain things on camera that were a bit personal and when we had the moments alone to discuss it, it was okay. But all in all, she was a blessing in disguise,” she said tearfully.

AJ had even tried to help Lindsay’s career get back on track. She set up a meeting with studio executive, DeVon Franklin, during Lindsay’s October LA visit. However, Lindsay didn’t even show up. She also didn’t allow filming nor did she have any contact with AJ, who she was supposed to stay with during the visit.

“I felt like there was no consideration,” AJ said, wanting an apology.

Lindsay was clearly not ready to open her life up to the public post rehab. Oprah even told her that if she wasn’t ready she would ask the crew to leave and it would all be over with. But Lindsay insisted she was ready and would be open and honest.

She also seems to be pushing away the people who could help her the most. AJ was a positive influence in her life. She was helping Lindsay on so many level and as soon as she tried to get Lindsay to truly face the problems in her life, Lindsay pushed her away. Her sober companion was also only hired for one month. He couldn’t even definitively and honestly say if she was still sober on his last day when OWN cameras asked his opinion. Meanwhile, Dina, Michael, and old friends with bad habits continue to be a constant in her life.

Last night’s episode also seemed like a metaphor of just how chaotic and messed up her life truly is. A truck full of Lindsay’s belongings arrived so she could begin to furnish her new NYC apartment. However, after hours of unloading the huge truck, the movers had to reload everything put it back in storage because it didn’t contain the items Lindsay wanted. To top it off, she didn’t even help the movers; she was sleep for most the most part and left all of the work up to her assistant and AJ. “Never again,” said one of the movers.

Dina and Lindsay also went to a consignment shop of designer clothes so Lindsay could donate unnecessary clothes so she could make room in her apartment. However, the two went on a shopping spree instead. Lindsay could have received $4,500 in cash for her clothes but chose to trade-in her garments for other apparel. She even owed the shop $300 after the spree. Dina was a complete enabler throughout the process and even selected pieces for herself.

Lindsay will never get back on track if she continues to make poor decisions and willingly invite chaos and drama in her life. It would have been nice for “Lindsay” to show the actress we root for so much doing well, but that’s just not the case. She wasn’t ready to open up on camera and that’s understandable for someone out of rehab and recovering. However, she is obviously hiding something from us and it makes it hard to believe she’s remained sober.

Do you think Lindsay Lohan is still sober? Should AJ Johnson have quit or continued to work with Lindsay? Join the conversation and tell us what you think.