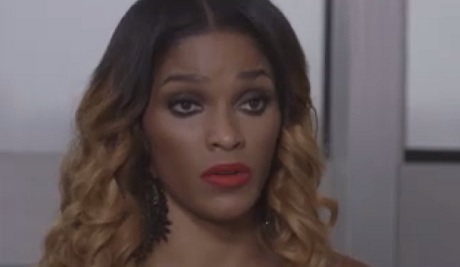 Love & Hip Hop Atlanta spoilers tease that Part 3 of the explosive reunion that still has everyone talking will air on Monday, September 8th on VH1. During Part 2 of the LHHA reunion show fans witnessed a massive brawl on the VH1 stage which began when Benzino referred to Stevie J as a “crack head.” Stevie J and his “wife” Joseline Hernandez both jumped out of their seats and attacked Benzino and his fiancée Althea Eaton and all hell broke loose from there. Due to the crazy violence that went down on the Love & Hip Hop stage, the third installment of the reunion was filmed behind closed doors with the cast separated and no live audience was present for safety issues.

In the all new Love & Hip Hop Atlanta spoiler video for Part 3 of the reunion, Stevie J and Joseline explain their side of the brawl they instigated. Joseline blames the entire altercation on Benzino and justifies, “If Benzino hadn’t been talking sh-t to Stevie, Stevie would have never gotten up and went up to Benzino, and I would have never gotten up. I would have been sitting my ass down right there for the whole show.”

In reference to Benzino Stevie J adds, “If you can’t take it then don’t dish it. I walked up on him, but the security grabbed me and they didn’t grab him, so he sucker-punched Joseline.” Joseline goes on to brag that if security didn’t intervene she would have beaten up Benzino and his girlfriend Althea.

Althea Eaton and Benzino also appear in the Love & Hip Hop spoiler video. When they are asked if Benzino sucker-punched Joseline during the brawl, they both respond, “No comment.” Since the infamous LHHA brawl, Althea Eaton is actually suing Joseline Hernandez for assaulting her, so it’s not exactly shocking that Eaton and Benzino are lawyering up and refusing to comment on the details of the fight.

Have you seen footage of the Love and Hip Hop Atlanta brawl? Who do you think is responsible for the brawl? Do you think Benzino was justified to hit Joseline. After all, she was attacking his fiancé? Check out the LHHA promo video and let us know what you think in the comments below, and don’t forget to check CDL for all of your Love & Hip Hop Atlanta spoilers.