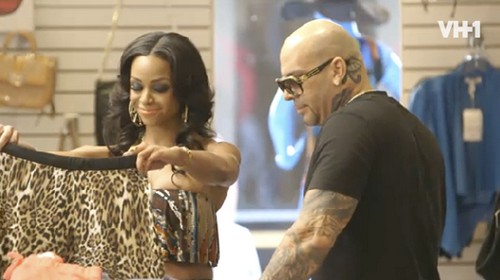 Tonight on VH1 their new series Love & Hip Hollywood airs with an all new Monday September 29, season 1 episode 3 called “Moving On.” On tonight’s episode, after their tattoo parlor argument, Hazel pops up at Teairra Mari’s studio session to talk about what happened.

On the last episode, Nikki made a discovery about her boyfriend. Meanwhile, a compromising picture tested Nia and Soulja Boy’s relationship, and Teairra Mari made plans to separate herself from Ray J for good. Did you watch the last episode? If you missed it, we have a full and detailed recap right here for you.

On tonight’s episode after their tattoo parlor argument, Hazel pops up at Teairra Mari’s studio session to talk about what happened. Things get crazy again and the two end up being back to square one.

Ray J wanted to ruin Teairra’s party because he felt she tried to do the same at his. So going tit for tat he dumped all of her stuff, which was personal things like clothes and feminine products; and laid it on the floor for the world to see.

It was embarrassing and Teairra ended up losing that legendary temper of hers. She hit out at Ray J and would have continue trying to fight him if her friends hadn’t held her back. Luckily, Ray J didn’t attempt to return punches and he was soon escorted from the scene. Though it is worth noting that one of the people pushing HIM towards the door just happened to be Hazel and she was in middle of a fight with Teairra before Ray walked in. So that’s loyalty!

She still had her friends back even when their friendship was on the brink of collapsing.

Now if only these guys shared the same kind of mentality. There’s always rumors surrounding rappers and their groupies but when they have a family at home then they should take extra care with the people they’re seen with. Soulja Boy was recently pictured with this mysterious woman and he doesn’t get why his girlfriend Nia is upset with him.

Well, it probably has something to do with the way she first heard about the picture. She was doing a radio show and someone had completely blindsided her with this image that apparently everyone was talking about. So they are going to have to talk about the photo. Because now that Nya is a mother she doesn’t want to play these kinds of games anymore.

Later, Omarion, Fizz, and their girlfriends all met up for dinner and they were just talking about issues they were having when Moniece came up. Amanda had met with her behind Fizz’s back and she was surprised at how crazy Fizz’s baby mother was. The other woman had told Amanda that she had to report to her everytime she was with Fizz and Moniece’s son. Then she implied that Amanda should only be concerned about sleeping with Fizz.
Their conversation was one sided and on top of that it was deeply insulting. So Amanda thinks Fizz should check his baby mother. And though Apryl wants to hear Moniece’s side of events before she pass judgement – she wants Omarion to follow suit and talk to his own mom. Omarion is about to go on tour and she doesn’t want to be stuck in the city with only a woman that hates her!

And his mom really has a problem with Apryl. She feels like she should be Omarion’s first priority and she’s not willing to make concession even though Apryl is about to have her grandchild. She feels like she’s owed and that’s that.

Fizz ran into the same problem with Moniece. She wants access to her son on her terms and is more concerned about Fizz’s relationship with her than theirs with their son!
Then, after much deliberation, Nikki decided to get back together with Mally Mall. But prior to saying they were all good – she needed to hear for herself who Masika was and if this side piece was trouble. Mally said he saw right through Masika and he ended things after a few weeks. Yet Masika version of events says they’ve been together for a couple of months and she just helped him find a new place to live.

So, actually Mally is lying to both of these women and sooner or later there will be a confrontation. Just not between him and them. It’ll more look like two women fighting over yet again a man that’s not worth it.

As for Teairra, it was wrong of her to dismiss her friend Hazel’s relationship with Yung Berg. That hurt Hazel and it turns out that was the final straw for her. Hazel was one of the few people to overlook Teairra’s anger issues and she’s tired of it now. So she chose to move out of their shared apartment. However she tried to do it secretly. Hence when Teairra saw the moving – she decided to burn all their bridges.

She accused Hazel of being talentless and Hazel called Teairra out to come fight her then. That, fortunately, didn’t happen but their friendship can’t possibly survive a fight like this.