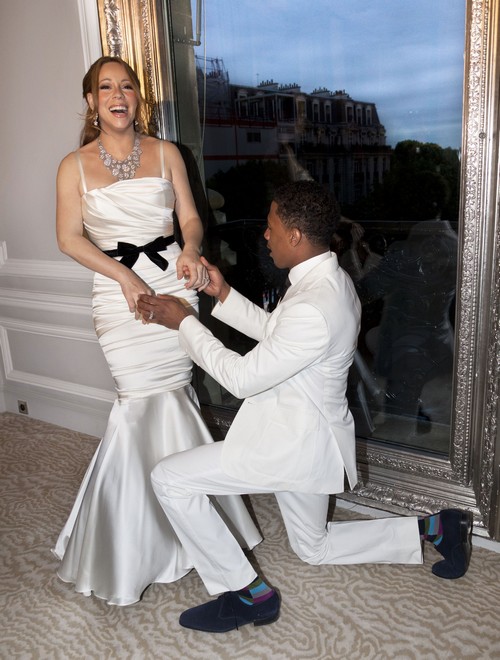 Mariah Carey separated from Nick Cannon and divorce is on the way. Nick cheated on Mariah while they were married, and as we predicted Amber Rose and Nick were having an affair before Amber even  filed for divorced fromWiz Khalifa. Guess what? We were totally right. Even though Amber Rose is trying to blame Wiz Khalifa for the end of their marriage, Wiz is throwing Amber’s business ‘relationship’ with Nick in her face. To be fair, both Amber Rose and Wiz Khalifa could have cheated on each other, but I think the evidence lies on Wiz’s side, right? Amber can claim that Wiz was putting his career above her and that he went on tour and left her at home with their kid, but it wasn’t until she started spending time with Nick Cannon that things went to hell. The timing is too coincidental for any other explanation to be as plausible, and to be honest, it just fits Nick Cannon’s MO.

First of all, we already know that Nick Cannon and Mariah Carey have been going through a bit of a rough patch lately. In fact, several sources even revealed that a divorce was becoming inevitable, even though Mariah was trying hard to salvage their marriage. But alas, Nick clearly didn’t have as much investment in their relationship, or maybe he just didn’t give a rat’s ass. He continued doing what he was doing, a.k.a. making ‘business’ arrangements with budding singers and reality famewhores to improve their careers – all in exchange for a little something, of course. I’m sure Wiz Khalifa was well aware of Nick Cannon’s reputation with the women he works with, and he probably realized what Amber was involved in before he blew a gasket.

Now that everything has more or less gone public, sources are telling us that Amber is being very careful not to be seen with Nick in public – and she’s continuing to deny cheating allegations. After all, both Amber’s prenup and Nick’s prenup is at stake with their respective exes, and if their affair went public, they can kiss all that money goodbye. Wouldn’t want that, would we?