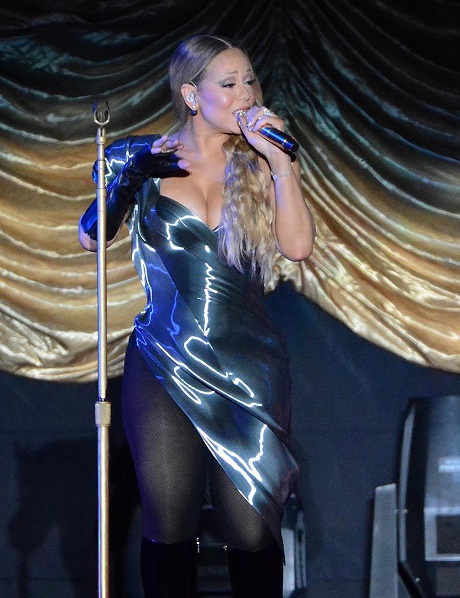 Considering Mariah Carey’s break-up from Nick Cannon’s, divorce, and sinking career, you would think the singer has enough problems to worry about. But, apparently on top of her personal and work problems – Mariah Carey is battling the bulge, and packing on the pounds. Carey has reportedly gained 20 pounds in the last two months and her weight is still climbing.

According to the November 17th edition of OK! Magazine, “Following the August announcement of her split from hubby Nick Cannon, Mariah Carey has been finding a little too much comfort in the refridgerator!” The magazine’s inside source goes on to explain, “Nights can be incredibly lonely for Mariah, and when she can’t sleep, she’ll head straight for the kitchen. She tries to stick to healthy snacks like yogurt, but when that doesn’t make her feel better she grabs ice cream and cookies. Mariah is completely exhausted by the time she gets offstage, and throws caution to the wind, especially after a few glasses of champagne. Come morning she hates herself for eating so much, but she’s stuck in the awful cycle.”

Mariah Carey is currently going through a very public divorce, and has to read about her soon-to-be ex Nick Cannon traipsing to Europe with women like Amber Rose – we would all be shocked if she wasn’t stress eating. What woman going through a divorce hasn’t turned to Ben & Jerry’s for comfort? Unfortunately, when you’re Mariah Carey you don’t have the luxury of packing on twenty pounds of divorce weight without the world noticing.

Have you seen recent pictures of Mariah Carey? Does she look like she gained 20 pounds, or more? Will she be able to get her weight under control – or is this just the beginning? Let us know what you think in the comments below!