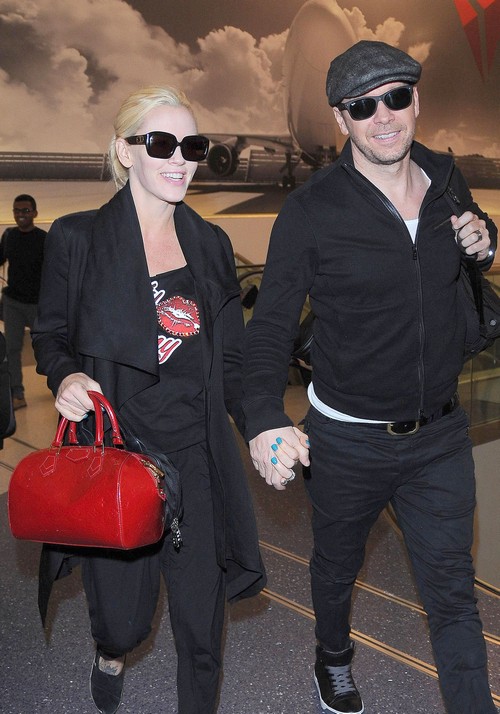 Mark Wahlberg and Donnie Wahlberg and the rest of their family have built a successful reality TV show about their close-knit family, Wahlburgers has been a huge hit on A&E. It’s safe to say the newest addition to the Wahlberg family, Jenny McCarthy won’t be receiving a cameo on the reality TV show anytime soon. The Wahlbergs are a force to be reckoned with, and according to new reports they are joining forces against Donnie’s new wife.

According to the October 20th edition of Star Magazine, “The strained relationships came to a head when Donnie’s family including Mark and Robert, as well as their mom Alma – all skipped the ceremony.” Star’s inside source reveals, “A lot of the Wahlbergs are suspicious of Jenny. She’s made a career out of being brassy and talkative and oversharing details of her personal life. It rubs them the wrong way and they don’t see her as one of them.” But, Jenny is determined to win over her in-laws, the source adds, “She’s convinced that as time goes on Donnie’s family will see how happy he is and realize how good she is for him.”

Well, anyone who has seen The Wahlbergers can tell you that Alma, the mother of the Wahlberg boys, is one tough lady. Jenny McCarthy definitely has her work cut out for her. This isn’t the first time that major celebrities have had an issue with Jenny McCarthy, she doesn’t have the greatest reputation in Hollywood and a lot of stars think she is hungry for fame and fortune and will stop at nothing to get her way. Rumor has it the Wahlbergs think Jenny Married Donnie for all the wrong reasons and is just trying to boost her celebrity status.

Are you a fan of Jenny McCarthy, so you think she and ‘Blue Bloods’ star Donnie Wahlberg make a good couple? Or, is she just using him because she is hungry for fame and fortune? Let us know what you think and Jenny and Donnie in the comments below!