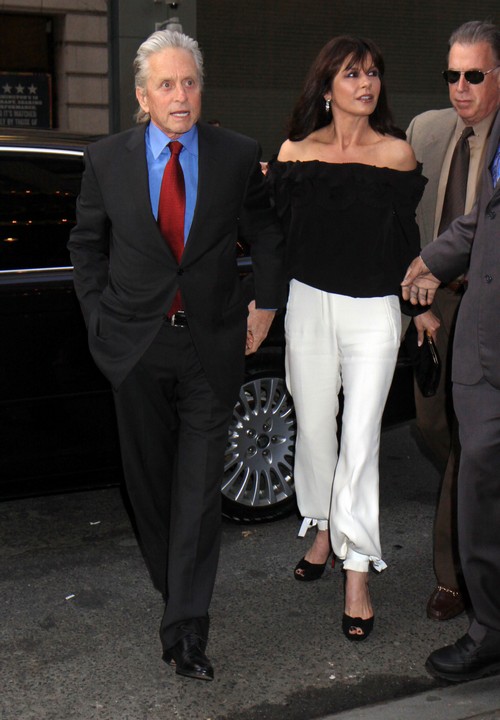 Catherine Zeta-Jones and Michael Douglas may have taken a ‘break’ last summer to work on their marriage, but Michael claims that they’re back together and better than ever. However, even though he states that they’re ‘very close‘ and ‘everything is going great’, he also adds [via People], “You don’t take love for granted… You just gotta remember not to take for granted that person that’s closest to you.”

It’s interesting that he’s bringing it up now, no? Sources tell us that even though Michael and Catherine are truly doing well right now, Michael’s still worried about their future. He’s reportedly worried about Catherine’s mood swings and Bipolar making a return, especially if she doesn’t take her medication.

She did attend a facility last year to get it under control, and it seemed like she had, at least for the time being. However, sources explain that while Michael’s doing his best to keep her happy and relaxed, but he’s still worried that she’ll end up leaving him again, especially if she has another episode.

Either way, neither of them is doing any jobs right now nor do they seem like they’re focused on trying to find another acting job. They both seem content to be focusing on their marriage and their family, and right now, that’s a good thing. This is one of those rare breaks that was actually good for the relationship, instead of the other way around. However, there’s always the chance that Catherine will start to focus on Michael’s cheating again, especially if her mood swings return. She may have forgiven and forgotten, but there’s no telling what’ll happen in the future.