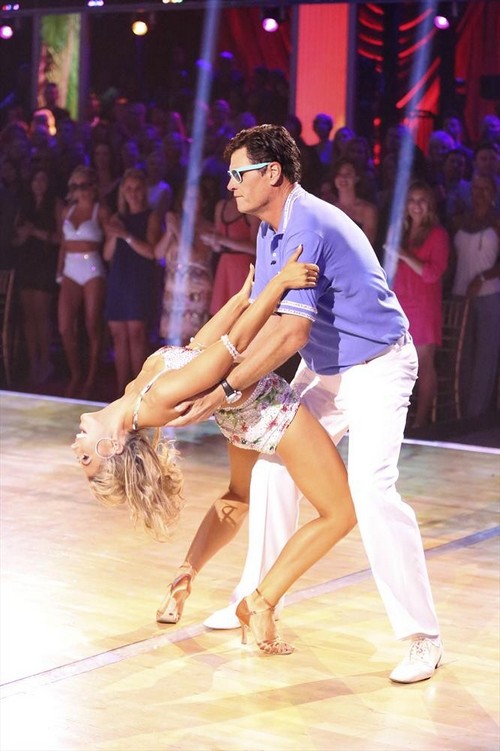 Tonight on the season 19 week 3 of Dancing with the Stars Professional Race Car driver Michael Waltrip & his partner Emma Slater danced a Waltz to “(Everything I Do) I Do For You” by Bryan Adams.  On tonight’s episode the 11 remaining celebrities dance to songs from their favorite movies.  show kicks-off with a spectacular opening number featuring the entire cast. Did you watch tonight’s performance episode?  If you missed it we have a full and detailed recap, right here for you.  If you missed any of tonight’s videos we have them all for you too!

On last week’s episode Michael performed a Samba and Bruno had this to say,  “You must be the envy of all the men in the country you had the Bond girls around you.  It is hard to concentrate.”  The judges scored Janel a 24/40.  If you want to see her Foxtrot from last week, you can check the video out here.

Michael Waltrip and professional dancer Emma Slater: dancing a Waltz routine.  Michael has been getting ready for his dance and tweeted about this week dance, “Love this…  I did my best, but it wasn’t enough. We’re still gonna race hard for wins, pride, and to get better for next season”

Judges’ comments: Julianne: “That was your best dance ever. I want to point out that that was so technical, it was the best.” Bruno: “You really worked very hard, it showed.” Carrie Ann: “I was mesmerized, I was pulled in, I was in heaven.” Kevin: “I believe hard work pays off, I saw you point at me, you won me over, good job.”