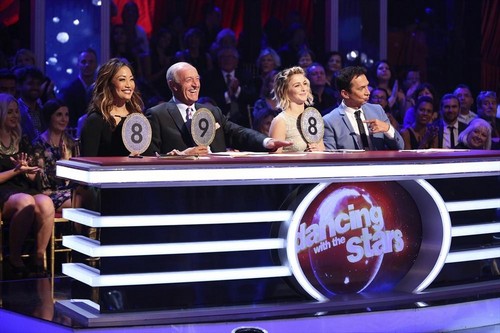 Tonight on ABC Dancing With The Stars returns with an all new Monday September 29, Season 19 week 3 episode called “Movie Night”. On tonight’s episode we will be going into the third week of performances where it will be movie night.

Tom begins the evening by announcing that were are back to one night of dancing with the stars; therefore, tonight one couple will be going home. Tom then announces that Randy Couture and Karina Smirnoff are in jeopardy.

Judges Comments: Julianne” “What happened to that strong leading man from week one? It was lacking strength and charm.” Bruno: “You can make mince meat of any bull but the timing was behind.” Carrie Ann: “Last week I asked for intensity and you did. You need more finesse though.” Kevin: “I don’t know what they were talking about, I have since you knock out men, this transitional is great, you embraced it.”

Judges Comments: Bruno “Doctor Evil is really pleased, you have such a strong individual style.” Carrie Ann: “I am so impressed with you. You are like the hip hop guy but there was no bounce in your step.” Kevin: “You murdered that brother. You don’t put a black man in a velvet suit and tell him to dance, but you did.” Julianne: “Honestly, you both do a good job together.”

Judges Comments: Carrie Ann: “It’s confusing to watch you, you have beautiful extension, but you have to point your toes more.” Kevin: “I got the hots for you, you like like a twenty year old girl. You dropped it like it was hot, I am in awe.” Julianne: “I have to agree, you dropped it like it’s hot, you are flexible.” Bruno: “No one can bend it like Betsy.”

Tom announces that the next couples that are safe; Michael Waltrip and Emma Slater , Sadie Robertson andd Mark Ballas, Lea Thompson and Artem Chigvintsev. Antonio Sabato JR. and Cheryl Burke are in jeopardy.

Lea Thompson & professional dancer Artem Chigvintsev dancing the Cha Cha Cha to Power of Love from the movie Back to the Future.

Judges Comments: Kevin: “I love that fact that you smiled through the whole routine, amazing job.” Julianne: “I was so bumed that your hand slipped, but you were versatile and it was so appropriate.” Bruno: “It was the power of Lea on splendid display.” Carrie Ann: “This was not your best dance at all, your head was too far forward.”

Michael Waltrip & professional dancer Emma Slater dancing the Waltz to Everything I do from the movie Robin Hood.

Judges Comments: Julianne: “That was your best dance ever. I want to point out that that was so technical, it was the best.” Bruno: “You really worked very hard, it showed.” Carrie Ann: “I was mesmerized, I was pulled in, I was in heaven.” Kevin: “I believe hard work pays off, I saw you point at me, you won me over, good job.”

Judges Comments: Bruno: “You turned on the fun factor, lift and turn from the waist in the future though.” Carrie Ann: “You are looking good out there but you are stiff in places that are a little strange. The confidence is there, just breath.” Kevin: “Boo to Carrie Ann, you are killing that tux, you executed it – you did good.”

Sadie Robertson & professional dancer Mark Ballas dancing the Viennese Waltz to the theme song from the Disney movie Up.

Carrie Ann: “So far that is my best dance tonight.” Kevin: “It was good, flawless, you made me want to do it.” Julianne: “You need to work on your arms, make them loosey goosey.” Bruno: “I was totally charmed.”

Tom announces the next couples that are safe: Janel Parrish and Valentin Chmerkovskiy, Bethany Mota and Derek Hough, Tommy Chong and Peta Murgatroyd. Jonathan Bennett and Allison Holker are in jeopardy.

Judges Comments: Kevin: “I loved that this song was not a traditional Tango song, good job.” Julianne: “I was going to say the same thing, I think you did a good job with what you were given.” Bruno: “That was hard, but you did it.” Carrie Ann: “We are here to encourage you to be the best that you can be, you did that.”

Judges Comments: Julianne: “What just happened? I thought I was watching a Broadway show, that was hands down perfecto.” Bruno: “This is your star making turn, bravo bravo.” Carrie Ann: “That was insane, you give good everything.” Kevin: “I bow down to that performance, it was amazing.”

Tommy Chong & professional dancer Peta Murgatroyd dancing the Argentine Tango to the theme song of Scent of a Woman.

Judges Comments: Bruno: “Sensual, languid, the story could not have been better told.” Carrie Ann: “You know when you are in the presence of Yoda, I was in awe. You are the real deal.” Kevin: “Some people fold under pressure, you came out after someone tore the roof of the building, you killed it.” Julianne: “Anyone that can lead Peta, is excellent, you are flawless.”

Judges Comments: Carrie Ann: “Mission complete, that was incredibly amazing.” Kevin: “It’s amazing when you pay to homage to someone, you did amazing.” Julianne: “I know the wrath of Derek, you did not miss a step, you became a woman.”

One couple is about to home; here are the results. The next couples who is safe is Antonio Sabato JR. and Cheryl Burke, Jonathan Bennett and Allison Holker.

The couple voted out and going home right now is Randy Couture and Karina Smirnoff.