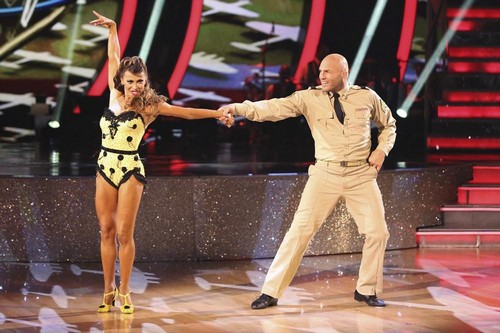 Tonight on the season 19 week 3 of Dancing with the Stars actor and MMA fighter star Randy Couture & his partner Karina Smirnoff danced a Paso Doble routine to “Eye of the Tiger” by Survivor.  On tonight’s episode the 11 remaining celebrities dance to songs from their favorite movies.  show kicks-off with a spectacular opening number featuring the entire cast. Did you watch tonight’s performance episode?  If you missed it we have a full and detailed recap, right here for you.  If you missed any of tonight’s videos we have them all for you too!

On last week’s episode Randy performed a Cha Cha Cha and Bruno loved it saying, “I think we could have a new hit action hero, plenty of satisfaction. Your energy and enthusiasm are in the right place.”  The judges scored Janel a 28/40.  If you want to see her Foxtrot from last week, you can check the video out here.

Randy Couture and professional dancer Karina Smirnoff: dancing a Paso Doble.  Randy has been getting ready for her dance and tweeted about this week dance, “Takin a break from rehearsal with V. It’s tomorrow! JAZZ! ”

Judges’ comments: Bruno “Doctor Evil is really pleased, you have such a strong individual style.” Carrie Ann: “I am so impressed with you. You are like the hip hop guy but there was no bounce in your step.” Kevin: “You murdered that brother. You don’t put a black man in a velvet suit and tell him to dance, but you did.” Julianne: “Honestly, you both do a good job together.”