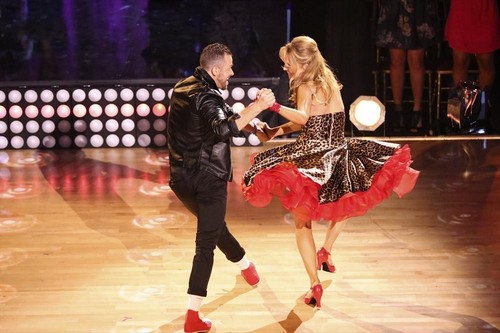 Tonight on the season 19 week 3 of Dancing with the Stars American actress, television director and television producer Lea Thompson & and her partner Artem Chigvintsev danced a Cha Cha Cha to “Power of Love” by Huey Lewis & The News.  On tonight’s episode the 11 remaining celebrities dance to songs from their favorite movies.  show kicks-off with a spectacular opening number featuring the entire cast. Did you watch tonight’s performance episode?  If you missed it we have a full and detailed recap, right here for you.  If you missed any of tonight’s videos we have them all for you too!

On last week’s episode Lea performed a jive and Len loved it saying, “I expected that your Foxtrot was going to be good last week but I was concerned about the Jive but you were fantastic.”  The judges scored Janel a 35/40.  If you want to see her Jive from last week, you can check the video out here.

Lea Thompson and professional dancer Artem Chigvintsev: dancing a Cha Cha Cha.  Janel has been getting ready for her dance and tweeted about this week dance, “Takin a break from rehearsal with V. It’s tomorrow! JAZZ! ”

Judges’ comments:  Kevin:“I love that fact that you smiled through the whole routine, amazing job.” Julianne: “I was so bumed that your hand slipped, but you were versatile and it was so appropriate.” Bruno: “It was the power of Lea on splendid display.” Carrie Ann: “This was not your best dance at all, your head was too far forward.”