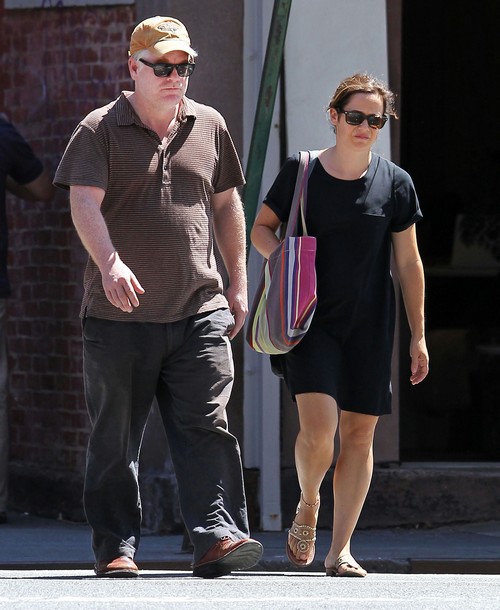 “Devastated and inconsolable” were the words used today to describe the girlfriend and baby mama of Philip Seymour Hoffman, Mimi O’Donnell upon learning of the actor’s untimely death. It was reported that she screamed when first hearing the news.

Obviously, overcome by emotion, her scream signified her shock and sadness, but was there more than pain behind her emotional outburst? Perhaps, as it is very likely that Mimi also felt the crushing pain of guilt upon her as some believe her leaving PSH may have contributed to his inability to cope and ultimate decision to break his sobriety by overdosing on heroin, trying desperately to numb the pain caused from losing his family.

As we reported, PSH did a short, ten day stint in rehab in 2013 after a relapse in 2012 put a good scare in him. Mimi thought he was on the right track, but obviously, was very wrong. His life seems to have quickly spiraled out of control, and it was only recently that he began going down the wrong path again and using drugs to numb his pain.

The award-winning actor began renting an apartment in Greenwich, the one now the scene of his final hours, in October 2013. Mimi and their kids lived just blocks away in the 4.4 million dollar home the family once shared. He wanted desperately to still be close to them, even though the couple were no longer together. In fact, it was his failure to pick up his children on Sunday that caused Mimi to immediately call his friend to check on him. So, signs seem to point to Mimi knowing what was going on. Given she had a friend check on him almost immediately after him not showing up shows that she may have expected the worst. Given the nature of his career, it is not so off-base to think maybe he was delayed on a business call or a meeting. So, was it the fact that there was a recent hoax about his death… or did she assume that this may have been the real thing?

As we shared with CDL readers earlier, there were reports claiming that PSH looked sickly at the Sundance Film Festival last month – check the video below, the dude looks totally strung out. We can now confirm that he also refused interviews during the same trip. He was likely already in the throes of drug abuse and riddled with guilt for possibly breaking up his family, becoming weak and giving in to heroin, for losing 23 years of sobriety, and worst of all, for letting down his girlfriend and children. His deep guilt, coupled with depression and anger led him down this path of destruction that he seemed to be controlling from behind the wheel.

So did PSH have a death wish? Did he want to feel pain or end his life to punish himself for letting down his loved ones and losing their family unit? He may very well have, given police claimed to have found 8 empty bags of heroin. Given that he was sober for 23 years, and drastically changed into a shell of his former self in recent months, we have to assume the mother of his three children and partner since 1999 would have seen some signs.

Living so close, and seeing him often when he spent time with the kids would have allowed her the chance to see him in a state she hadn’t seen him in throughout their relationship. We have to wonder why she allowed the father of her children to suffer through his agony alone and become so entrenched in his depression that he’d consider taking his own life or giving it up to heroin. Perhaps her involvement, or her confiding in his friends could have made the difference in him getting help. He was obviously open to seeking help as his recent detox stint indicates. An intervention by friends and family could have saved his life.

Friends and loved ones absolutely have to notice a difference in someone who has abstained from drugs and alcohol for 23 years, and suddenly become a different person who is obviously using heavy drugs. Whether Mimi still loved him or wanted to be with him, as the mother of his children, and as a human being, she should have reached out to help him.

Now, the guilt PSH likely felt for his own relapse will be nothing compared to the guilt Mimi carries with her for the rest of her life, always wondering if she could have done something to save his life.