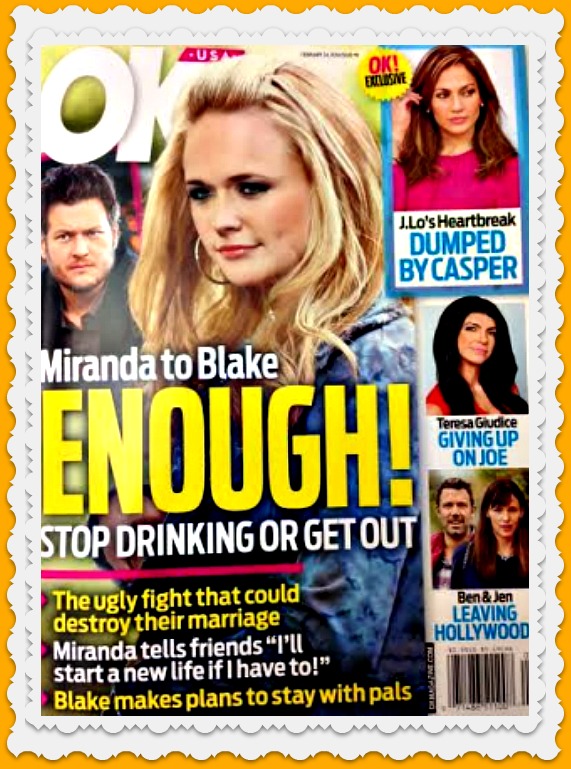 According to the latest cover story from OK! Magazine, Miranda Lambert has given Blake Shelton an ultimatum: stop drinking or get out. I guess Miranda’s sick and tired of dealing with Blake’s alleged drinking problem, huh?

Apparently, Miranda’s given up drinking completely to keep up her recent weight loss, and that’s led to fights and arguments with hubby Blake. A source tells OK!, “Miranda told Blake that he’s almost 40 years old and needs to stop with his all-night frat-boy lifestyle. Miranda finally declared that he needs to either grow and mature with her, or she’s leaving him behind. She seriously wants them to lead a sober life now because it’s working so well with her.”

Basically, this all circles back to the rumored cheating and flirting stories that always seem to surround Blake Shelton. Miranda doesn’t trust Blake to be alone and drinking, especially not while in Los Angeles. Unfortunately for her, Blake spends a large portion of his time in Los Angeles without her, and that includes his ‘all-night frat-boy lifestyle’. I mean, Blake hangs out with Adam Levine, and we all know the people that Adam hangs out with, right? Victoria’s Secret models and people who love to party. Not the best combination for a man who has a wife, but doesn’t see her often.

There’s also a story about Jennifer Lopez getting dumped by Casper Smart – which, puh-lease. There’s no way that Casper would ever dump J. Lo, especially since he’ll never be relevant again if he does.

Finally, Ben Affleck and Jennifer Garner are reportedly moving out of Hollywood. If that really happens, how will they conduct their Oscar season photo-ops? I guess they can always call the paparazzi to wherever they are, although that’ll be a lot harder to blame on the paps.