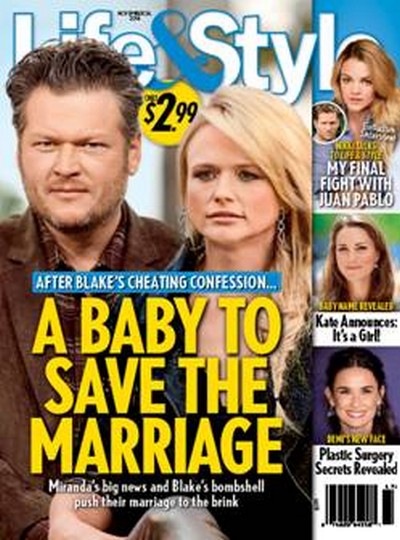 Miranda Lambert wants a baby and to be pregnant after Blake Shelton’s alleged cheating confession – and all this to save their marriage? Blake Shelton and Miranda Lambert have been married for a few years now, but their marriage hasn’t exactly been perfect lately. Barring the cheating rumors, the infidelity rumors, and the rumors of the couple growing apart, Blake and Miranda are rarely seen together in public. A large part of that is due to Blake’s job on The Voice keeping in Los Angeles for the better half of the year, and Miranda Lambert touring the country or staying in Nashville. Of course, you would think that they would try to work it out so they could be in the same city at the same time, but that rarely seems to be the case. As such, it’s not a huge shocker to hear that Miranda Lambert and Blake Shelton have been on the verge of getting a divorce, and the only thing stopping that from happening is a desperate last-minute plan hatched by Miranda.

According to the cover issue of Life & Style Magazine, Miranda Lambert is planning to get pregnant to save her marriage to Blake Shelton, even if that means undoing her hard work and gaining back all that weight via a pregnancy. Of course, Hollywood couples using babies to save their marriages is nothing new, and Blake Shelton and Miranda Lambert will be neither the first ones nor the last ones to use it. I don’t know how much longer a baby would prolong their marriage, but Miranda Lambert’s pregnancy will at least be good for some positive publicity – for a period, anyway.

Life & Style also has a feature on Demi Moore’s plastic surgery revelations [duh, Botox], and Juan Pablo Galavis’ final fight with Nikki Ferrell before their inevitable breakup. The real story there is how/why Nikki stuck with Juan for so long, considering his epic douchebag-ness and all. And finally, Kate Middleton is having a girl – something we knew weeks ago, by the way.