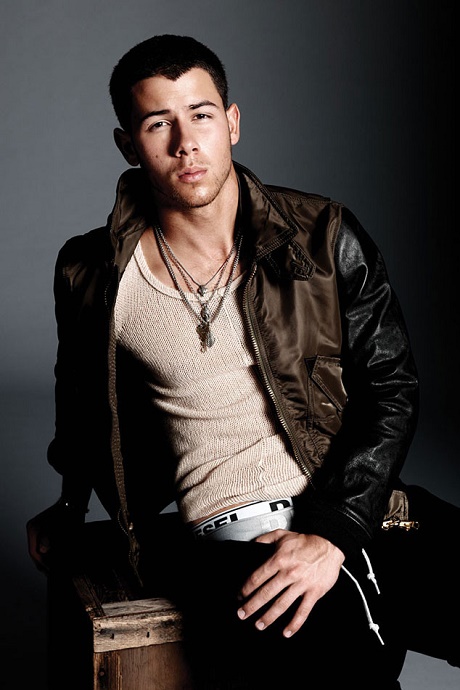 They came, they saw, they conquered, and then they disappeared like Kirstie Alley’s diet plan. What happened to The Jonas Brothers? The same thing that happened to Macy Gray, Hanson, Anastasia and Clip Art; they overstayed their short-lived welcome and cried on sheep. The trio of brothers left a very visible skid mark on the entertainment industry’s white sofas.

Former baby-band member, Nick “The Young Un’” Jonas, gave the world an embarrassing glimpse into his private life (parts?) by re-enacting Mark Wahlberg’s infamous Calvin Klein photo shoot. The original campaign had people in nervous stitches, because then-hot Marky Mark had Fed-Ex in his tight, white briefs. The Jonas reboot is- Well, we don’t have words for it. It’s like describing colours to dead people.

The 22-year-old showed off his post office on the cover of Flaunt magazine’s latest edition. A curved muscle here, a coy smile there and- Oh gawd, we can’t! We just can’t. Deep breaths. Deep. Breaths. Deep. Fed-Ex. Bedroom eyes. Lowered jeans. Shirt removal. Black and white shirt removal. Lowered jeans. Underwear. Post office. Purple aliens are sad. What’s the meaning of life? Where am I? Who am I?

And then there’s the butt crack, a.k.a. The Destroyer of Everything, a.k.a. Halle Berry’s Oscar. Nick’s lowered jeans gave us more than we bargained for. Someone dropped Simon & Garfunkel’s missing sister on Nick’s derriere. “What are you blabbering on about?” Hair. We’re talking about hair, and no, not the movie with Treat Williams. The elegant butt toupe is more prominent than a drunk Metallica fan at a Stevie Wonder concert. It’s just there like Boney M.

At least the rest of Nicky Nick (don’t judge) is finer than a Brazilian sunset.

Imperfection at its best? Do you think he’s hot? Let us know your thoughts in the comments below.