The Bachelorette 2014 Season 10 Spoilers: When Is Nick Sutter Eliminated by Andi Dorfman? 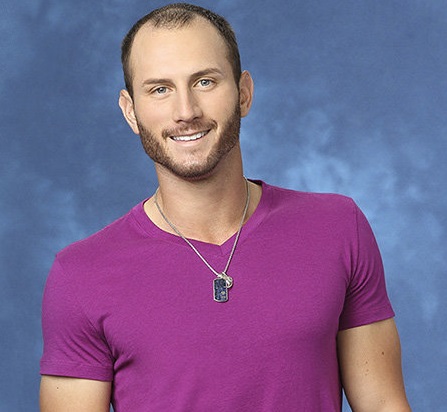 Season 10 of The Bachelorette is underway, and we have sat through twenty-five extremely awkward limo entrances. After the first official Rose Ceremony, Andi Dorfman eliminated six guys, narrowing her search for love down to nineteen bachelors. One of those nineteen guys who escaped the first round of eliminations is Nick Sutter, a 27 year old professional golfer from Chicago, Illinois.

Nick seemed to hit it off with Andi during the season premiere of The Bachelorette, and they even spent some 1-on-1 time together: Nick gave Andi a little golf lesson outside the mansion during the cocktail party.

According to Bachelorette spoilers, during episode 2 Nick will accompany Andi and thirteen of the other guys to OHM Night Club in Hollywood. While there, Nick will awkwardly strip on stage for charity in a robot costume and hot pink sneakers. It’s safe to say Nick couldn’t compete with all of the sexy cowboys and firefighters. (It is unclear whether he chose to be a robot, or just was dealt a bad hand and the corny costume was assigned to him.) Regardless, Andi Dorfman wasn’t impressed.

After the awkward strip club performance, Bachelorette spoilers tease that Andi eliminates Nick Sutter at the Rose Ceremony at the end of episode 2. We obviously haven’t seen Nick’s robot dance, but it must have been pretty horrible if Andi eliminated him a few hours later. Then again, maybe the robot fiasco was irrelevant, and Andi had already decided he would be one of the next Bachelorette casualties long before they went to the night club.

Check out our LIVE recap of tonight’s episode. Tune in later!

What do you think, Bachelorette fans? Should Andi have kept Nick Sutter around longer, or are you shocked he didn’t get sent home during the season premiere? Let us know what you think in the comments below.