BY Amanda Austin on May 26, 2014 | Comments: one comment
Related : Reality TV, Recap, Television, The Bachelorette 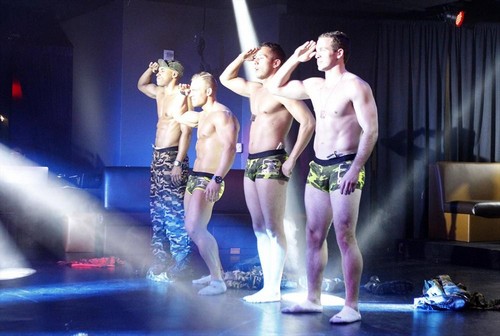 The Bachelorette Andi Dorfman airs tonight on ABC.  In this second episode nineteen bachelor’s move into the mansion. Andi takes a contender on a one-on-one date that involves an afternoon at the beach and a helicopter ride to a mountain; and another solo date involves an excursion to Santa Anita Park. On the group date, 14 of the men are asked to strip for charity. Sixteen bachelors remain after the rose ceremony.

On last week’s episode Andi Dorfman, 27, a beautiful and successful woman, had it all at first glance – her loving family, her great friends, and even her dream job. But she realized there was something missing. So, last September, she put her busy life on hold to try and find love on “The Bachelor.” She thought she had found her match, but in the end it was not meant to be, and Andi walked away from Juan Pablo. She did not, however, let that experience stop her desire to continue her search for her “great love.” Now, unwilling to settle for less, she is willing to put her dream job as an Atlanta assistant district attorney on hold to pursue the love of a lifetime. Andi will embark on her own journey to find her soul mate, choosing from 25 handsome bachelors.  Did you watch last week’s episode?  If you missed it we have a full and detailed recap, right here for your enjoyment.

On tonight’s episode Eric is pumped when he finds out that he scores the first romantic outing of the season. Fourteen men are in for a big surprise when they meet Andi at a popular male exotic revue for what will be a special event for charity – “Bachelor Gives Back.” But what they will be asked to do will cause everyone to blush. On the last date, Chris is treated to a glamorous 1940’s style day at the races at Santa Anita Park. But, at the cocktail party, one man needs to apologize for his bad behavior during the group date and has to hope Andi will give him a second chance. After careful deliberation, three men are sent packing as the Bachelorette attempts to make her fairytale come true.

The competition ramps up inside as a professional opera singer impresses Andi with his powerful voice. Marquel, who has quite the sweet tooth, treats the Bachelorette to a cookie tasting and Josh M., a former professional baseball player, whisks her away for some alone time.  By the end of the show Andi will have the 19 men who will move into mansion and continue on the quest for her heart.

Tonight’s episode is going to have people talking and you are not going to want to miss a minute. The Bachelorette airs tonight at 8PM so don’t forget to come back for our live recap then!

Episode 2 of The Bachelorette kicks off with Andi Dorfman waking up the next morning following the first Rose Ceremony. She can’t wait to start dating and seeing whether or not one of these guys is her future husband.

Meanwhile at the Bachelor Mansion Chris Harrison pays Andi’s bachelors a visit, and informs them that The Bachelorette this year is “one of the best” he has ever met. He delivers their first date card, and Carl King reads it aloud. The first 1-on-1 date goes out to Eric Hill, he heads upstairs to get ready.

Andi Dorfman arrives at the Bachelor Mansion later on to pick up her date Eric Hill. The other guys see them off, and express how jealous they are that they didn’t get the first date. They arrive at the beach, and strip down to their bathing suits and build a sand castle. While they are hanging out on a beach, a helicopter arrives and they climb inside. Eric still has no idea where they are going though.

The helicopter lands and Eric and Andi climb out and they have arrived at the top of Bear Mountain. The mountain top is covered in snow, they meet up with their snowboard instructor and get decked out in their gear. Andi chalks her snowboarding skills up to her dancing skills, which if you watched The Bachelor last season you know are horrendous. Eric doesn’t mind her less than stellar snowboarding skills though, he declares there is “no other place in the world” he would rather be.

Next Eric and Andi head to a cabin at Big Bear Lake to eat a romantic dinner together and have a night cap. Andi jokes that Eric is a “Renaissance Man” and is “good at everything.” They discuss Eric’s current project, and all of the countries that he has visited.

Back at the mansion another date car arrives, and Tasos reads it allowed. Ryan, Marquel, Bradley, Craig, Brett, Patrick, Cody, Tosos, Josh, Ron, Marcus, Nick S., and Dylan are invited on a group date to “bare their souls.”

Back at the cabin Eric is describing all of his siblings and nieces and nephews, and how badly he wants to have a family and children of his own. At the end of the night Andi presents Eric with a date rose and he accepts it.

The next day Andi heads to OHM Night Club to meet the guys for her first group date. They pile off the bus and all rush to greet her. She reveals that their date is going to be for charity today. She takes them inside the club and introduces them to Chippendale dancers. As the dancers begin dancing in front of them, the guys put two and two together and realize they will be stripping. The Hollywood Men instructor has all of the guys audition for their performances, there will be a robot, cowboys, army men, and firefighters. The guys get divided into teams and begin learning their stripper routines. Marcus is nervous because he has a solo act and has never danced before on stage. The men receive their costumes, or lack there of. Cody dubs himself “Magic Cody” and Marcus is on the brink of a panic attack.

The dances go off without a hitch, Andi watches from the audience with Bachelor alums Sharleen Joynt and Kelly Travis. And of all the dances Andi actually enjoys Marcus’s dance of all the dances because he maintains eye contact with her throughout the performance and she feels like he is dancing just for her. Afterwards all hell breaks loose during the cocktail party, and Craig lets loose his crazy alter ego. Andi is in shock by how Craig and some of the other bachelors are behaving. After Craig pushes Patrick and gets physical with him, the camera crew swoops in and escorts him out. Marcus comforts Andi after the near brawl, and she presents the group date rose to him, he accepts.

The next day Andi is ready to start fresh, and put the wild drunken antics of the previous night behind her. A date card arrives at the mansion and the guys learn that Chris has scored a 1-on-1 date with Andi next.

Andi heads to the horse race track and Chris meets her there. They both get dressed up in their race track get-up, and bet on horses from the VIP booth. Afterwards they have some drinks and get to know each other. Chris confesses to Andi that he thought he had found his soul mate, and they were engaged, but they wound of growing apart and going their separate ways. Andi is impressed with how open and honest Chris is, and she present him with a rose at the end of their date. Afterwards she surprises him with a private concert on the race track, they share a dance and their first kiss.

At the Bachelor Mansion the guys are preparing for their next Rose Ceremony. Craig is already walking on egg shells, and desperate to repair the damage he did at the after party. Andi arrives at the mansion for their cocktail party. Andi sits down with Nick Viall first, and he surprises her with her own date card and pops open a bottle of champagne. They chat about what kind of guy she is looking for, Nick confesses that he doesn’t want someone “good”, he wants someone “great” that he can share an unconditional love with.

Andi sits down with Marquel next, and she is thrilled about how easy it is to talk to him and how hilarious he is. Brett gives her a sock puppet show, and Josh flatters her and tells her that she “gives him something that he hasn’t felt ever before.” Then she and Josh share their first kiss.

Next Andi sits down with Craig, who is fortunately sober, and he tries to make amends. He puts on a guitar and sings a song to her about how he “messed up last night and bared his junk to thirteen other guys” and begs her to “let him stay.” He is hopeful that after he serenaded her he might get a rose.

Chris Harrison comes in and announces it is time for their rose ceremony, the guys take their places and Andi prepares to pass out the roses. Marcus, Eric, and Chris have nothing to worry about because they already received roses during their dates. Next Andi gives a rose to: Ron, Dylan, JJ, Marquel, Andrew, Tasos, Josh, Cody, Nick V, Patrick, Brian, Brett, and Bradley.

Craig, Nick S, and Carl have all been eliminated from The Bachelorette.