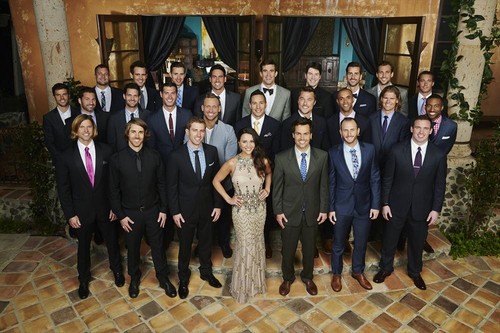 The Bachelorette premieres tonight on ABC and in this 10th season opener Andi Dorfman is the new bachelorette who will be meeting 25 potential suitors. In this first episode, a past “Bachelorette” cast member tries to crash the party. By the end of the evening, the field is pared to 19 men. The episode is dedicated to contestant Eric Hill, who died April 23, 2014, from injuries sustained.

On tonight’s episode Andi Dorfman, 27, a beautiful and successful woman, has it all at first glance – her loving family, her great friends, and even her dream job. But she realized there was something missing. So, last September, she put her busy life on hold to try and find love on “The Bachelor.” She thought she had found her match, but in the end it was not meant to be, and Andi walked away from Juan Pablo. She did not, however, let that experience stop her desire to continue her search for her “great love.” Now, unwilling to settle for less, she is willing to put her dream job as an Atlanta assistant district attorney on hold to pursue the love of a lifetime. Andi will embark on her own journey to find her soul mate, choosing from 25 handsome bachelors.

25 eligible men come from all over to try and win Andi’s heart. Her nervousness melts away as soon as she begins to meet the bachelors, who are just as anxious and excited as she is. Tasos, a romantic young musician, entices Andi by having her fasten a lock on a gate with him like the “Love Lock” on Paris’ Bridge of Sighs. Cody shows off his physical prowess as a hunky personal trainer by pushing his limo up the driveway and Brett, a hairstylist with an off-beat sense of humor, offers her a curious gift – the floor lamp from his hotel room. Professional golfer Nick S. skips the limo and drives up in a golf cart. Eric, quite the world traveler, offers Andi a pair of dolls that a little girl in the Andes gave him for his future girlfriend. But it’s party time when Craig makes a splash, uncorking a bottle of champagne in the driveway, spraying it everywhere.

The competition ramps up inside as a professional opera singer impresses Andi with his powerful voice. Marquel, who has quite the sweet tooth, treats the Bachelorette to a cookie tasting and Josh M., a former professional baseball player, whisks her away for some alone time.  By the end of the show Andi will have the 19 men who will move into mansion and continue on the quest for her heart.

Tune in at 8PM EST on ABC to watch this premiere of The Bachelorette. We’ll also be updating fans right here as the show airs so be sure to check back in with us.

Tonight’s season premiere of The Bachelorette kicks off with host Chris Harrison dedicating season 10 to Eric Hill, one of the contestants who unfortunately passed away after he was done filming this Spring.

The episode begins with Andi Dorfman in Atlanta Georgia, she cleaned out her office and stopped by her parents’ house to say goodbye before she headed off to California to begin her tenure as the next Bachelorette. She warns her parents that the next time they say her she will have the Final Two with her.

Andi heads to Los Angeles to meet 25 of America’s most eligible bachelors, and Chris Harrison shows Andi her suite and tells her to get ready for the limo entrances. After he leaves her sister pays her a visit to help her get ready for the night. Her sister gives her a pep talk and then she heads to the mansion for limo entrances, and Chris Harrison greets her.

The first limo arrives. Marcus 25 year old Sports Manager from Texas climbs out of the limo and greets Andi, he informs her he “has a lot to offer.”

Up next is Chris, a 32 year old farmer from Iowa. He tells her “she is the reason he is here” and he is excited to get to know her.

JJ, a 30 year old “Pantrapeneur” from San Francisco climbs out of the limo next. He is followed by Marquel, a 32 year old Sponsorship Salesman.

The next bachelor to arrive is Tasos, a 30 year old wedding event coordinator. He has brought a lock, which they place on the gate of the mansion, and then he has Andi make a wish and throw the key in the fountain.

Up next is a 28 year old personal trainer named Cody, who pushed the limo up the driveway to show off his strength. The next bachelor to arrive is Steven, a 30 year old snowboard product developer from California. Andi jokes that she is going to “turn the Cali boy into a little Southern boy.”

Rudy, a 31 year old attorney from Long Beach arrives next. He provides Andi with a signed waiver giving her permission to “search his story.” The next bachelor to arrive is Carl, a 30 year old firefighter from Florida. Jason a 35 year old urgent care doctor arrives next, he diagnoses her with a fever, “because she looks pretty hot.”

The next limo arrives and Nick, a 33 year old software specialist from Chicago arrives and Andi is “digging his polka dot tie.” Dylan, a 26 year old accountant from Boston arrives next. He is so nervous he can’t remember what he was going to say.

Patrick, a 29 year old advertising executive from California climbs out the limo next, with a soccer ball. Andi jokes about having “another soccer player.” He assures her he is “nothing like the last guy she knew that played soccer.”

Brett, a hairstylist from Pennsylvania climbs out of the limo next, with a 4 foot tall lamp. His Mom always told him to “never greet a woman empty handed,” so he brought her a lamp from the hotel.

The next limo arrives, and Craig an accountant arrives and pops a bottle of champagne because he “wanted to celebrate that she is The Bachelorette.” Ron, a 28 year old beverage sales manager from Tennessee arrives next, and he is followed by Bradley, a 32 year old opera singer. He promises to sing for her later.

Josh, a 29 year old telecommunication manager from Colorado arrives next. He is followed by Nick, a professional golfer, who arrives in a golf court. Andi informs him she “has a little swing.”

The next limo arrives and Brian, a 27 year old basketball coach from Pennsylvania arrives. Andi helps him fix his tie before he heads inside. Andrew, a 30 year old social media manager arrives next and announces that “Andi and Andrew has a nice ring to it.” Mike, a 29 year old bartender from Utah arrives next. He tells her he has to get going, but he gives her his phone number before he goes inside.

Eric Hill arrives next, and he gives Andi two dolls that were made by a little girl he met in the Andes. She told him to give them to her girlfriend, so he is giving them to Andi.

The final bachelor arrives-Josh, a former pro baseball player from Atlanta, Georgia arrives next and introduces himself to Andi. He informs her he just moved to Atlanta, so they are actually neighbors.

Andi heads into the mansion to mingle with the guys and get to know them. Josh takes Andi away for some 1-on-1 time first, and informs her that “his Mom loves her.” Andi is confident that Josh is her type, but she is going to keep her eye on him because she isn’t sure he is being genuine.

Eric Hill sits down with her and discusses his work with her, he is in the process of filming a movie called World Odyssey which is a video journal of him travelling across the world.

Marquel sits down with Andi and presents her with a huge tray of cookies so that they can have a “cookie tasting.” Andi thinks that Marcus “has swag” and he “nailed it with the cookie tasting.”
Meanwhile Patrick and Andrew are hitting it off, and realize they have a lot in common. Patrick says that Andrew is “more his caliber.”

Andi sits down with Chris and he tells her about his family farm back in Iowa. Next, Andi spends some 1-on-1 time with Marcus. She can’t get over how “hot” he is. He speaks some German and Polish, Andi says that she is “intrigued by him.”

The cocktail hour is winding down, and it’s time for Andi to hand out her First Impression Rose. She takes Nick Viall aside and tells him that he “left a lasting impression on her” so she gives him the rose. He accepts the rose “with pleasure.”