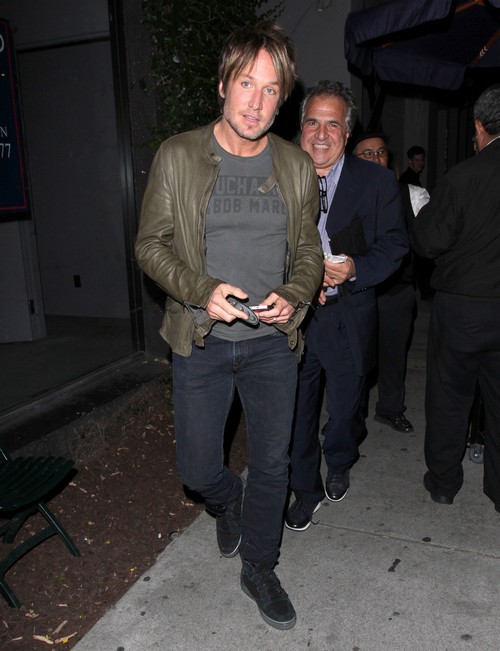 Nicole Kidman and Keith Urban have been married for a long time, but as we know, that doesn’t necessarily mean anything in Hollywood. They’re certainly trying to make their marriage work, but considering that they so rarely spend time together, you have to wonder how much longer they can keep trying.

Keith was once again spotted out and about in West Hollywood without Nicole by his side, at the popular vegan restaurant Crossroads on April 24th. He wasn’t with another woman, which is probably a small consolation to Nicole. However, he spends most of his time filming American Idol or flying back and forth from Sydney to the US, and when he’s not commuting or working, he’s going on tour. According to a recent report from Star Magazine, Nicole is getting sick of it, and sick of the fact that he’s putting yet another tour above spending time with his family.

American Idol wraps in May, and Nicole was reportedly expecting the family to spend time together after that. Unfortunately, it looks like Keith is once again putting his career ahead of his family, even though Nicole’s sacrificed a lot of career opportunities to spend time with him and her kids. Perhaps it’s just getting too much for her to handle? And here he is, supposedly flirting with other women and going out to dinner in a notoriously party-friendly city without her – and looking pretty happy while he’s at it.

Yes, I’m sure she wouldn’t want him to miserable while he’s away from home. And it’s not like he’s just gallivanting around the city for no reason – he does have a contract with American Idol, and he does fly home as often as possible. But is that enough? Maybe for Nicole, it no longer is.

Update: Keith is staying quiet in Los Angeles – neither he nor Nicole have responded to the rumors about their impending split.  Do you think they can make it through this rough patch?