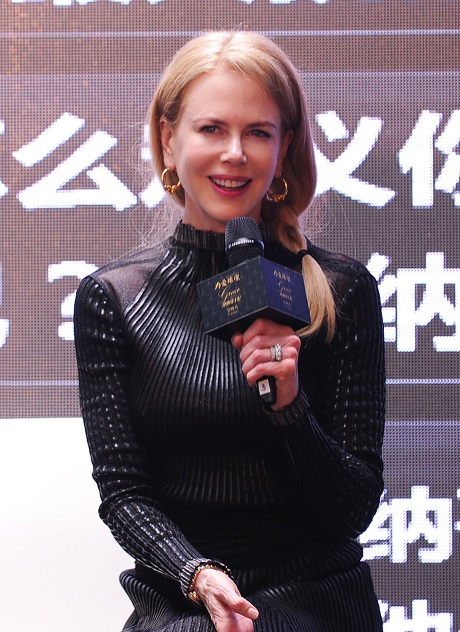 Nicole Kidman just can’t stop herself from dabbling in plastic surgery, can she? Actually, I shouldn’t even say dabble since she’s become a walking plastic surgery advertisement in the last five years. Although her features have become extremely distorted thanks to excessive use of Botox and injections, it’s not stopping her from messing with her body as well. According to several top doctors, Nicole has also gotten a a pretty impressive boob job.

Nicole turned up at the Swisse Celebrate Life Ball in Melbourne on Thursday, and several experts pointed out her larger-than-normal chest. Granted, Nicole was obviously wearing a dress that pushed up her breasts, but it’s still a significant difference from her chest seven years ago.

Several plastic surgeons have weighed in and according to the National Enquirer, they have noted the increase in her breast size, claiming that she’s gone up at least a cup. Another doctor also added, “She hasn’t aged that much or gotten heavy so I feel they look like nice small implants.” They do add that the augmentation looks good on her, although a ‘touch overdone’.

Just when you think that Nicole has finally stopped messing with her face, she changes gears and turns to her body instead. However, several sources have weighed in and added that all of Nicole’s plastic surgery can be attributed to her failing marriage. Apparently, Nicole is extremely self-conscious about aging, and thinks that Keith Urban will dump her the minute she starts looking old and haggard. Thus, her solution is to make herself look like a wax figure instead…?

I can’t blame her for being insecure — there’s a trend in Hollywood [and really, everywhere in the world] where successful men dump their wives when they get older and replace them with younger versions. Nicole might have been threatened by the idea of Keith divorcing her for a younger woman, and she might have thought that getting a boob job would prevent that.

Plus, there have been enough separation rumors about the duo that this doesn’t come completely out of left-field. It would also explain her constant plastic surgery tweaks, which could be attributed to their constant fighting. Unfortunately, I don’t think her boob job effort will really work, especially if her marriage has run its course.

What do you think about the Nicole Kidman/Keith Urban relationship? Is it doomed? Let us know!