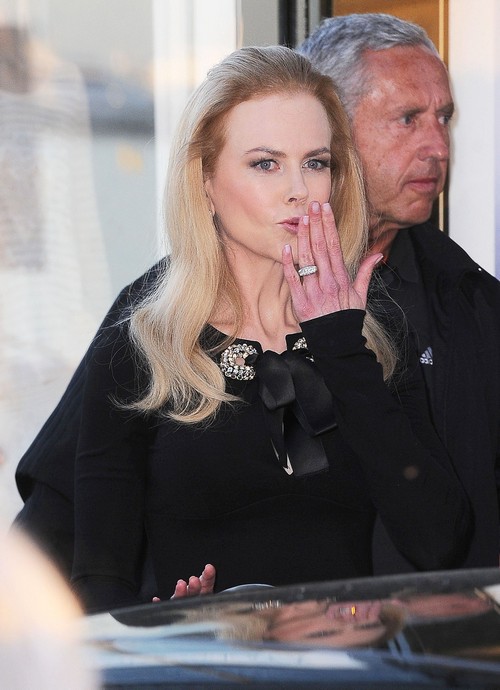 Nicole Kidman has touched down in France for the Cannes premiere of Grace of Monaco, but trust me when I say the movie would have been better off without her presence there. Yes, Nicole Kidman is a huge movie star and she’s even bigger in Europe than she is in the States, but does it count when you can hardly recognize her face anymore?

There are several pictures of her signing autographs for fans, but her face looks so frozen that it’s almost as if we’re looking at a wax statue of her face. She can hardly smile, and it looks like she’s in pain every time she tries to move her face into something resembling an expression. Seriously, Grace of Monaco is a guaranteed flop at this point, so what’s the need for all the botox?

See, this is what happens when celebrities get insecure, and even A-list Oscar winners are not immune to it. For the past few years, Nicole’s plastic surgery has slowly been going out of control, and whether it’s because of her career or her failing marriage, we don’t know.

On the outside, it seems like Nicole and Keith Urban have the perfect relationship However, even without the rumors of a troubled marriage and infidelity, the plastic surgery has to be freaking Keith out. I mean, he married Nicole Kidman, not the crypt keeper version of Nicole Kidman.

But you know who doesn’t mind plasticized faces? People who frequent Cannes for their next paramours, mainly billionaire sheikhs and businessmen. They don’t care what your face looks like, so long as you’re even remotely famous – and Nicole definitely fits that bill. Considering that Keith is not with Nicole in Cannes [since he has shooting for American Idol], is it possible that Nicole’s using Cannes as a platform to land a new husband – and possibly a new role in the process? She knows Keith isn’t going to stick around forever, especially if she keeps messing with her face, so what’s the harm in jump starting the rebound process?

Look at Nicole’s hands and then look at her face – now back to the hands… WTF! Do you think she’s had TOO MUCH PLASTIC SURGERY???