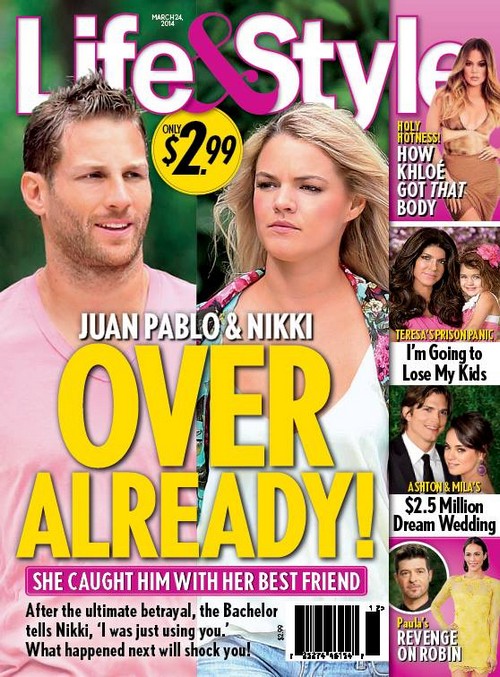 It’s been only a few days since the Final Rose ceremony on the Bachelor was televised across the country, but according to the latest cover issue of Life & Style Magazine, Juan Pablo and Nikki Ferrell have barely spoken to each other since filming it.

Apparently, Nikki is furious that Juan cheated on her with her best friend, Andi Dorfman. A source explains, “After seeing Juan Pablo’s make-out sessions with Andi, Nikki’s worried about what really happened between them in the fantasy suite. Deep down, she’s convinced he had sex with her.”

Well, we know they’re still on speaking terms because Juan Pablo tweeted a picture of them together after the finale aired to much criticism. They were clearly trying to combat the rumors that they’d already broken up, although it might have also had something to do with appeasing the ABC network brass. But as the source explains, Juan Pablo just isn’t interested in making an effort, whether this relationship was ever real or not. The source adds, “Juan is a different person than she thought. He doesn’t seem interested in bringing this relationship forward. He’s not making any effort to maintain and foster it.”

Basically, Juan wants them to have a long-distance ‘relationship’, even though Nikki’s willing and able to move to Miami to live with him and his daughter. Well, of course he wants to be long-term – how will he hook up with random girls otherwise?

What do you guys think? Do you think that Nikki should just dump Juan and move on with her life? Or is she contracted to make an effort?

In other Life & Style news, Khloe Kardashian‘s managed to gain a fantastic new body, Teresa Giudice is panicked about losing her kids, and Ashton Kutcher and Mila Kunis are planning a $2.5 million dream wedding. Plus, Paula Patton is apparently getting ‘revenge’ on Robin Thicke for allegedly cheating on her.