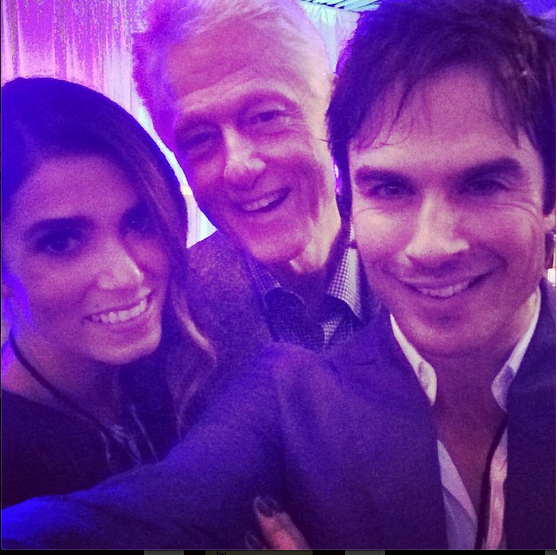 If you asked any The Vampire Diaries fan [well, maybe not ANY fan], they would tell you that Nina Dobrev and Ian Somerhalder are meant to be together. But if you asked anybody on the set of the actual show, they would tell you the exact opposite: that Nina Dobrev and Ian Somerhalder can’t stand each other, are fighting, and are only maintaining a modicum of an air of professionalism to keep their jobs. I mean, they can’t exactly fire Nina (she is allowed to have a new boyfriend, after all) or Ian (despite his obnoxious sacial media PDA with Nikki Reed), you know? Together, they make up two/thirds of the lead trio, and relationship issues aren’t going to be enough to shake up the status quo.

However, sources tell us that Nina and Ian have actually stopped speaking completely, and that all of their conversations are only held in-character. I suppose their freeze-out isn’t THAT surprising, considering that Nina supposedly has a new boyfriend and Ian has been flaunting his relationship with Nikki Reed in excess PDA mode.

It’ll be interesting to see how things progress from here, especially since the end of The Vampire Diaries is fast approaching. Will Nina Dobrev make the move into The Originals, provided that Ian doesn’t follow? Will she prefer launching a big movie career? Will Ian land another television show? The only thing I can’t see is both of them working together again, especially as love interests. That obviously leaves an expiration date on The Vampire Diaries, but it also leaves a big question hanging over the future of their ‘friendship’.

Sources tell CDL that the chances of an Ian Somerhalder and Nina Dobrev reunion is next to nil, what with tempers running high and emotions leaving unchecked. Plus, they only have a few months until the sixth season wraps, and possibly one more season after that. But with the way things are, I don’t know if the network will want to prolong the show, especially when the ratings are nothing to write home about. Besides, we hear that Nina is tired of having to keep her new boyfriend hidden.