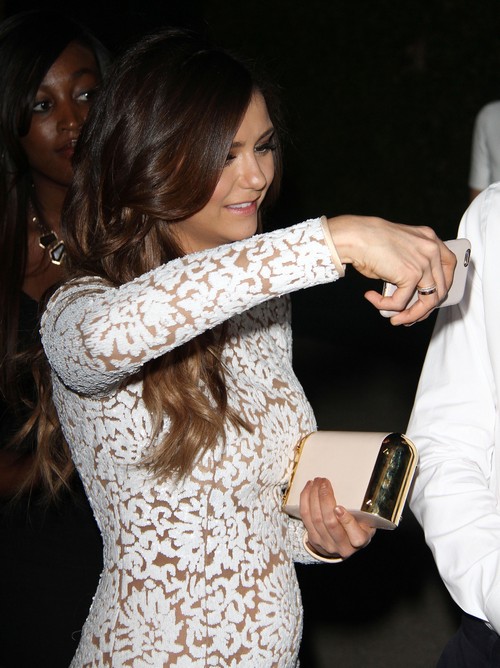 Is Nina Dobrev hiding a secret boyfriend? Would it shock anyone if she was? Nina’s been through the ringer with the media in the past few years, and her relationship with Ian Somerhalder has unfairly put The Vampire Diaries star in the spotlight more than once. However, the girl is 25 years old, very pretty, and works in Hollywood – and has been single for the past year? Yeah, right…

Now, I’m not saying that she has a new boyfriend, even though that’s what we’re hearing. But I’m sure that she has had various hookups and flings, but has managed to keep the identity of those men secret. However, if she actually DOES have a new boyfriend, then kudos to her for keeping that a secret. The Vampire Diaries season 6 fans don’t need any distractions while the show is currently playing. I mean, a Nina Dobrev/Ian Somerhalder reunion wasn’t going to happen anyway, no matter how much Vampire Diaries fans may wish for it, but still many have hope. Ian has a new girlfriend, Nikki Reed, and he keeps talking about how much he loves her to the whole world.

In that sense, I actually have to give credit to Nina Dobrev for keeping her love life quiet, and for not wanting to throw her water in Ian Somerhalder’s face every time he starts talking about Nikki. No matter how you put it, discussing your girlfriend in such glowing terms while you still work with your ex is such a not-nice thing to do. Maybe it was Ian’s way of getting revenge on Nina for dumping him [IF she dumped him], or maybe he’s trying to make her jealous. Whatever it is, he should take a cue from her and learn to keep his romantic life out of the media.

Do you guys agree? Or do you think that Nina Dobrev should also go public with her new relationship? Is Nina hiding her new boyfriend until The Vampire Diaries season 6 is done? Let us know your thoughts in the comments below.