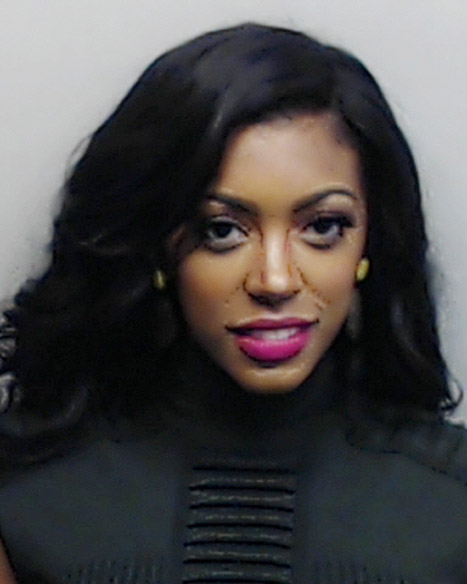 Porsha Williams was arrested in Atlanta after she was stopped for speeding and  was found to have an invalid suspended driver’s license. Well, if Porsha Williams was looking to crush claims that her storyline is “boring” on this season of Real Housewives of Atlanta, she sure did a great job today. Porsha went and got herself arrested  today for speeding. Driving 78 mph in a 55 mph zone, Porsha was pulled over and ended up arrested after Atlanta police learned she was driving on a suspended driver’s license. She was taken to jail where she was later booked, claimed TMZ. Good thing she had the $1,726 for her bond, and bailed out.

Porsha did serve a little time, however. Wonder if Kenya Moore, who Porsha finally made peace with after the reunion brawl, came to visit?? Apparently it was NeNe Leakes who orchestrated the peacemaking in an effort to help everyone get along a little better.

Porsha, 33, can be seen smiling for her mugshot before her short stint at the Atlanta City Jail. Good thing the arrest happened at the end of 2014 as Porsha is hoping for a drama-free 2015. She’s had a rough year after being demoted on RHOA—she’s now just in a recurring role on the show.

This isn’t her first arrest, either. Porsha was famously arrested back in April for simple battery after a vicious fight in late March with RHOA castmate Kenya Moore during the taping of a reunion show. Let’s hope she starts 2015 on a better note.