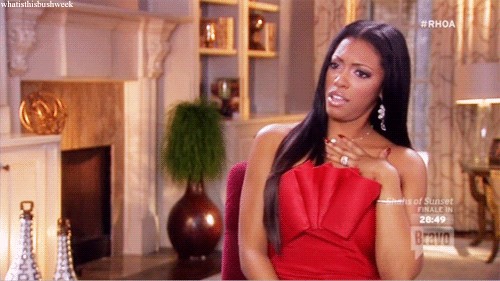 In the endless drama that is The Real Housewives of Atlanta, Porsha Williams has been charged with assaulting co-star Kenya Moore. Now, there’s a warrant out for her arrest. Atlanta authorities are allegedly going after the reality TV star after she got in a fight with Kenya on their reality show. Porsha supposedly attacked Kenya first, and it was Kenya who decided to take legal action and file a report against Porsha. This crazy gurl’s a wanted woman, and it sort of sounds like she’s on the run. Ha! A RHOA star fleeing the law. What next?

Apparently, Bravo has raw footage of the attack, which proved to be enough evidence to charge Porsha with assault; thus, the warrant out for her arrest. According to TMZ, Porsha also wants some justice. She “wants the D.A. to file felony aggravated assault charges against Moore.”

We’ll see what becomes of this little kerfuffle and be sure to clue you in on any further details as they come forward. This isn’t the first time Porsha’s gone full-on crazy on Kenya either. We reported the following just last month: “The Real Housewives of Atlanta got together yesterday to film their highly anticipated reunion show and word on the curb is that Kenya Moore suffered a severe beat down at the hands of one of her housewife friends. Surprisingly, we hear it wasn’t Phaedra Parks that laid them paws on Kenya; we hear it was actually Porsha Williams (Stewart) that threw them things at Kenya.”

Sounds like this girl — or maybe the both of them — need some anger management classes ASAP. Bring in the judge. Things are gonna get messy!