Ellen DeGeneres and Wife Portia de Rossi Not Having A Baby But Getting Divorced Instead? 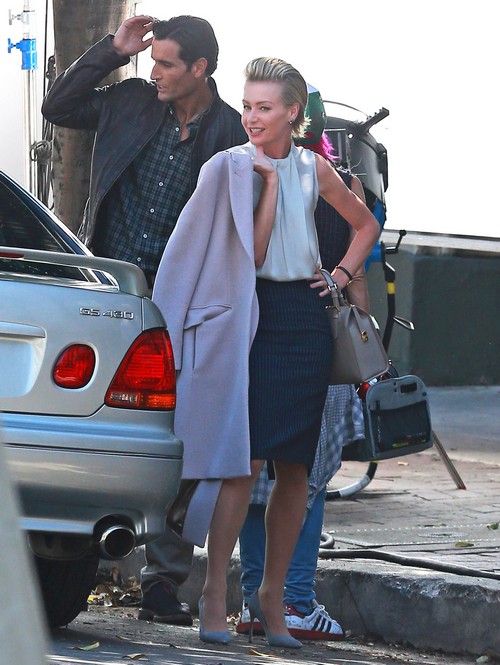 Portia de Rossi and Ellen DeGeneres might have had some marriage troubles and talk of divorce earlier this year, but they’re back together and stronger than ever – or so they want us to think. Portia’s been on a roll promoting her multi-episode guest arc on Scandal, even though she’s barely had enough presence to make an impact. But disregarding the impact [or lack thereof] of her role, she’s still been promoting the heck out of the show. As part of this promotion, she was a guest on Ellen’s show, and guess one of the topics they discussed? That’s right, it’s time for Babypocalypse 2014.

Ellen first brought up the topic by saying, “One of the main things that everybody’s asking me about and asking you about, and I thought I would let you clear it up, is, if we’re having a baby or not.” Portia then replies, “It would be so fun for everybody if we were, wouldn’t it? No… we’re not…”

Well, celebrities lie all the time so I’ve learned not to take anything they say at face value. However, Ellen DeGeneres and Portia de Rossi having a baby? Most of the rumors suggesting that Portia and Ellen were having a baby were also claiming that Ellen only agreed to the baby to save their marriage. But now, according to this interview, Ellen and Portia are NOT having a baby. Does that mean that divorce is still on the table? If it is, then Ellen and Portia are both better actors than I give them credit for.

What do you guys think? Are Ellen DeGeneres and Portia de Rossi getting divorced? Let us know your thoughts in the comments below.

Actress Portia de Rossi is spotted filming scenes for the hit TV show ‘Scandal’ in Hollywood, California on September 10, 2014. Portia will be featured in the fourth season of ‘Scandal’ for a multiple-episode arc. FameFlynet