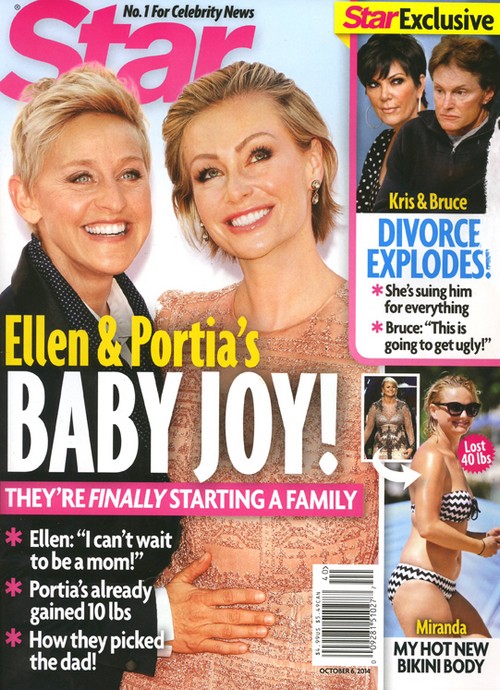 Ellen DeGeneres and Portia de Rossi are no longer getting a divorce and fighting over Ellen’s cheating or bickering over Portia’s [lack of] career. According to Star Magazine, Portia de Rossi is pregnant and Ellen DeGeneres is delighted she and her wife are becoming moms – they are now having a baby together. Since tabloids are under the impression that babies always solve marriage problems, they have taken this to mean that Ellen and Portia are back together and stronger than ever without a divorce in sight. Apparently, pregnant Portia de Rossi already gained ten pounds, and Ellen DeGeneris is hopping with excitement to ‘finally’ become a mom. Ah, the great motherhood whitewash strategy. You don’t even need to have a child to pull this off – just pretend you’re having a kid, and suddenly the media will forget all about your supposed marital troubles.

Of course, Star’s main reason for assuming that Portia is pregnant seems to be based on a picture of Ellen touching Portia’s stomach. By golly, this simply MUST mean that Portia is carrying a child, because why else would Ellen be touching her stomach like that? It can’t be affection or anything of the sorts – nope, it has to be that Portia’s pregnant.

Plus, Ellen and Portia have apparently picked an unnamed and non-famous sperm donor, because that’s just how they roll. They don’t want some prima donna celebrity genes making their way into the DeGeneres-De Rossi baby pool. No siree, they’re happy with their fake baby and fake baby bump, thank you very much.

Star’s cover this week also has a feature on Bruce Jenner‘s divorce from Kris Jenner, and the ensuing financial battle that they’re going through. Kris is supposedly suing the pants off Bruce, except that Bruce will probably chuck his pants soon enough in favor of skirts. I don’t know whether to believe this, simply because Bruce isn’t going to want to deal with the public attention that will undoubtedly follow a major financial battle.

Finally, Miranda Lambert continues to show off her post-weight loss body, having dropped an astonishing forty pounds – a.k.a. her please-stay-with-me Blake Shelton body. She looks great, there’s no denying that. But the fact that she felt the pressure to lose that much weight when she looked fine before says a lot about the industry that she’s in, not to mention her husband’s infidelity issues.