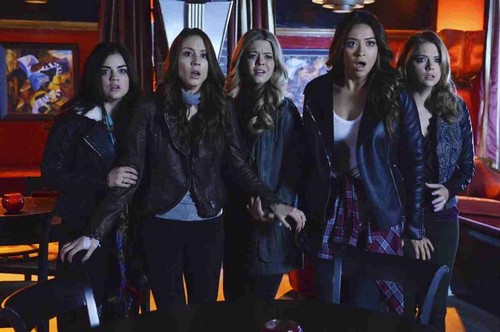 Pretty Little Liars fans have been waiting on the edge of their seats for the summer premiere of PLL Season 5, and it is finally here. In less than twenty-four hours, our favorite liars will return to ABC Family with the explosive first episode of Season 5. We scoured the internet and put together an extensive list of Pretty Little Liars spoilers to give you something to read while you (impatiently) wait for the premiere on ABC Family.

Is Ezra Dead? Pretty Little Liars fans were shocked during the Season 4 finale when Ezra Fitz was shot and seriously injured by “A” just as he was about to reveal the true identity of “A.” Well, according to the promo video for Season 5, Ezra does make it safely to the hospital after he is shot and appears to be stable. However, “A” is desperate to shut him up, and sneaks in to the hospital room to attempt to take Ezra out again? So, does “A” kill Ezra? Well, not with a bullet, but there is a chance they could sneak into the hospital and finish the job.

Caleb Rivers. Pretty Little Liars spinoff Ravenswood was cancelled after just eight episodes aired on ABC Family. Tyler Blackburn left PLL to star in the spinoff; since the series was cancelled, TPTB have announced that Blackburn’s character Caleb Rivers will return to Rosewood during Season 5 of Pretty Little Liars. Rivers’ reentrance into Rosewood will be interesting since his girlfriend Hanna Marin has since moved on and is in a relationship with newcomer Travis.

New York. The Pretty Little Liars Season 5 premiere will pick up just moments after the Season 4 finale, according to PLL spoilers. The liars and Alison will still be in New York while Holbrook and the Rosewood police department begin searching for them. The girls will make a shocking discovery in New York when they devise a plan to trap “A” and find someone they never expected.

Spoby Reunion. Spencer Hastings and Toby Cavanaugh’s relationship was in a strange place at the end of Season Four of Pretty Little Liars. Supporters can rest easy though; this is not the end of Spencer and Toby as we know it. Executive producer Marlene King announced on Twitter back in May that there will be a Spoby scene that fans won’t want to miss during Episode 2 of Season 5.

Lucas Is Back. Pretty Little Liars spoilers for Season 5 also tease that Caleb Rivers will not be the only one returning to Rosewood — so will his and Hanna’s trusty side-kick, turned “A,” turned loyal friend, Lucas. There is no news yet which team Lucas will be playing for when he returns this season, but one thing is for sure, it will be interesting to see his reaction when Alison DiLaurentis returns to Rosewood. Alison was Lucas’s nemesis, and she nicknamed him “Hermie Hermaphrodite” before she disappeared.

Christmas In Rosewood. Rumors are running rampant that there will be a Pretty Little Liars Christmas during Season 5 of PLL. Every season fans can look forward to a PLL Halloween episode, but never a holiday episode. How fun would it be to see “A” shimmying down the liars’ chimneys on Christmas Eve, or the liars in high-speed pursuit of their nemesis during a snowy blizzard?